Goin' Up Cripple Creek to Have a Little Fun 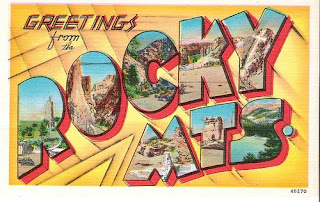 Remember those glass postcard holders from the 1950's? You slid the postcard in between the rectangles of glass to display it. We never had one in my home, growing up, mainly because we never went anywhere. And I don't mean anywhere good. We never went anywhere. Other than an infrequent, to say the least, trip to the Twin Cities, we rarely went more than thirty miles from home. World weary travelers, we were not. A travel fund, we did not have. Family vacations? Didn't happen. The money simply wasn't there. The closest we came was going over to Wisconsin in the fall of '66 to visit my dad's relatives where we slept in a cabin by a river. My sister Jane and I didn't know it at the time but it was the same cabin my paternal grandfather was living in several years earlier when he took a shotgun, walked into the woods, and ended his life. That night on the Yellow River was one of the coldest of my life. I'll tell you about it some time.

Once in a while I flash on my much younger self, remembering her walking through her grandparent's bedroom and seeing for the first time one of those postcard holders sitting on their dresser. I remember that the card was from the Black Hills. I think that is the exact moment I got bit by the travel bug, when The West started calling my name. Just the name of a certain place, the sound it makes traveling off my tongue, draws me to it in an almost magnetic pull. I once drove a certain route through Montana just so I could go through a town called Round-up. Then, there's Jackson Hole, Santa Fe, Yellowstone, Cheyenne, Coeur d'Alene, and Cripple Creek.

It sits in a valley, high in the Rockies of Colorado. It's not a place you would choose for a winter spot. It's no Aspen. But they know beauty. At dusk locals drive up a steep and winding dirt road where it veers off at the edge of town.  They park their cars, stand on the ridge overlooking the town, and wait for the sun to set behind the Rockies. A friend and I joined them on a trip there in the early '90's. It was a spectacular light show. 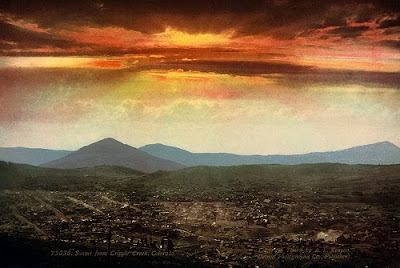 Now, it's another town gone horribly awry, another old mining town that succumbed to the lure of gold in the form of a casino ... many casinos. Before I go off on a tangent about The Way Things Are, let me tell you a little bit about The Way Things Were, the Cripple Creek I fell in love with back in 1975.

It was the same summer I first went out west with my son, Trevor, and his dad. I had long felt the romantic draw of this western mountain town. It represented something unnameable to me. It had a colorful history that seemed to have a ghost-like presence in its streets. I had heard the unlikely but irresistible tale of finding turquoise on the dirt side streets ... if you looked hard enough after a rain. So, shortly after arriving in town I wandered up a side street with my nose to the ground, keeping my eyes peeled just in case. I made a right turn and found myself down yet another small side street that sat above the town. It was a dead end that ended up outside what I thought was one of the coolest old houses I'd seen. It had multi-brown shingled siding with some big pine trees right outside the door.  Out back, a chicken coop was definitely leaning to the left. I stood outside this house for a few minutes and imagined who might be occupying it: somebody cool, a leftover hippie holing up in Cripple Creek waiting for the world to change. I had to pull myself away from the fantasy of living my life in Cripple Creek, waiting with them.

Meanwhile, down on Main Street I could hear the sound of a dulcimer. I walked back down and saw a gal sitting on a bench playing it as it lay there across her lap. It was the sweetest sound I'd ever heard. The buildings, the sidewalks, the people ... everything about this place said, 'Life Is Good.'  It was sunny and laid back and had stores with names like The Brass Ass. It had a big brass ass, as in donkey, in the storefront window. I bought a t-shirt which I have to this day with its name and logo on it. I haven't worn it in a while ... quite a while. It was my thing then ... buying t-shirts and belt buckles from every cool stop along the way. I collected a few.

We spent the day wandering the streets, licking ice cream cones, listening to the dulcimer in the distance and finding trinkets to take home to family and friends. We visited the old library which stood at the end of main street like a matriarch keeping watch over the town. That reminds me ... sometime I want to tell you about some cool libraries I've known. This was one of them ... creaky wood floors ... the musty smell of old books ... and a couple of older women who ran the show ... who were probably younger than I am now.

The Brass Ass is now a casino ...  the library, a museum. Time marches on.

In '75 we were just passing through. It was not a destination. It didn't become that until many years later when I went back with a friend who had once lived there. We were looking through his photograph albums one day as he told me about his years in Cripple Creek. There it was. The brown shingled house on the dead end side street I'd stood in front of for the longest time back in '75. He was living in that house then. He said he decided to move back to Minnesota later that summer and create a homestead out of the woods. Life is a funny little thing, isn't it?


Note: one of my earliest posts mentions Cripple Creek: Merriam-Webster Is a Friend of Mine, May, 2009. You might find it interesting...


The vintage postcard of the sunset over Cripple Creek is from 1899.

Posted by Teresa Evangeline at 10:23 AM