Turning the Day Around 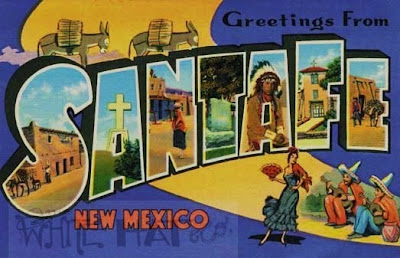 Here I am, in Santa Fe, once again. This was my home for over seven years. Some of the most wonderful years of my life. I had arrived here, in the late fall of 2001, in a fog of emotions and with an empty gas tank. I had run out of gas, in every way, just before the first exit. How very fitting it was, looking back. My gas gauge had quit working shortly before embarking on my journey to a new life. I could usually go about three hundred miles on a tank. However, I failed to consider the wind outside Pecos and going through the canyon in the home stretch. I won't go into the details of finding a way out of my predicament. It involves a police cruiser, a gas station, and a taxi driver who also served as an angel. I was here and that's all that mattered; the Land of Enchantment, affectionately referred to by many as the Land of Entrapment.

This trip is about closing that chapter of my life. I made a decision, when I went home to Minnesota for a visit this past summer, to return to the place where I grew up and had lived most of my life. There was something about the lush greenery, lake after lake, and so many trees, that called me back. There was also this thing I call Inner Knowing, that Guidance that speaks to us from time to time, when we are willing to listen, giving us vital  information. I Knew I was supposed to return home. I have had no second guessing about that decision. That's the nature of Inner Knowing.

I woke up this morning in Santa Fe with a less than enthusiastic approach to the day. I was having trouble with the notion of giving even more of my stuff away and really getting down to bare bones, just keeping good old fashioned memorabilia. The things we can't do without. I felt discombobulated by the task before me. I could not seem to unwind my thoughts and get to a place of stillness. Then, just before going to the storage shed, my son called. We talked about things that brought perspective to my situation. He reminded me to just "glide through." Good timing, good visit.

Through the years I have owned a few homes and each time managed to go in with a rather light load, only to leave a few years later with rooms of stuff that I can't even recall when or how it arrived. It just seemed to accumulate without my consent or even being aware of it. And, yet, there it would be, waiting to see what I would do with it as I prepared to move again. Each time I gave much away, hoping some person or family would find some small bit of joy in my things and my things would enjoy their new homes. That's worked pretty well. I find I like giving stuff away. It's good to recycle and it's liberating, to boot. It brings with it a renewed sense of freedom. I can light out for the territory at a moment's notice. Have.

This time, it was the Salvation Army that got area rugs, vacuum cleaner, bedding, clothes, bric-a-brac and stuff like that. Everything fell into place at the storage shed. Like clockwork. Decisions made effortlessly. And it felt really good.

Now, I'm checking out the show times. I have some movie-going to catch up on before heading back to Minnesota. Pedro Almodovar's "Broken Embraces," with Penelope Cruz, of course, and "Crazy Heart," with the soon to be Oscar winner, Jeff Bridges. Jeff is one cool guy. Can't wait to see his tale of an almost broken man. I think, I hope, it involves redemption. I like stories where somehow, in some unexpected fashion, goodness finds a way.

Anne, my friend from Carson, called awhile ago and we chatted about our day, storage sheds, insights, and naps. It was nice.

Now, evening has fallen and there's a man outside my window quietly calling to his dog, Otis. My son's cat is named Otis. That feels nice, too. It feels peaceful. It feels right. It's been a really fine day. 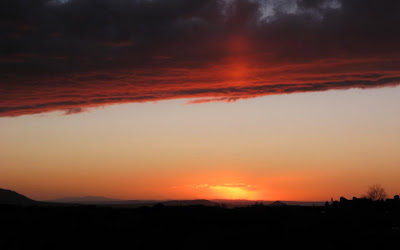 There's never a shortage of angels in the city of Holy Faith.


Addendum: As it turns out, the main character in "Crazy Heart" is a man named Otis....


Posted by Teresa Evangeline at 8:47 PM