I'll Be Home For Christmas, But Not With Faron Young 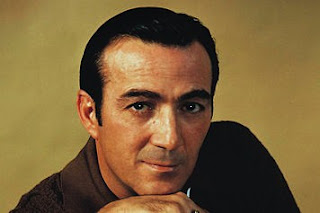 It's nigh on four in the morning and I couldn't sleep so I thought I might as well get up and do something half-way constructive. I hope this qualifies.

I'm leaving Texas at daybreak and heading north. I want to be home for Christmas. Every time I use the phrase, "It's four in the morning," I can't help but think of Faron Young. He had a song a whole bunch of years ago with that title. He's another bad boy whose dark, good looks caught my attention at an early age. He was quite a bit older than I, but he looked out at me from those album covers and I did a fair amount of looking back. I was young and foolish.

Many years later, when I was in my songwriting phase, I was hanging out at the bar in the Holiday Inn in Nashville and there he was. From the next table over, he leaned in to do a little flirting. I remember feeling absolutely frozen. It was Faron Young, for Pete's sake. He looked as handsome as ever and none the worse for wear. He and Patsy Cline had a torrid affair back in the early '60's (just a bit of trivia). Anyway, Faron took his own life in 1996, and I've always wished I'd flirted back a bit more. Just a bit.

I left Santa Fe a couple of weeks ago and headed down to Texas to visit my sister, Chris. Chris is the former tomboy of the family who used to gussy up her homemade knives with some classy woodburning. She and her hubby, Frank, live in the hill country, west of San Antonio. I love the rolling hills, the live oak, and the longhorns, but the winding roads (and I do mean winding) are always a challenge for my motion sickness issue. Driving over to Comfort is less than comfortable, but the end result is lunch at an outdoor table amongst the trees, which always includes some killer scones with cheese and jalapenos.

Her house sits not too far from the Guadalupe River. That is one beautiful river. When I think of the river of life we are all floating down, I think of the Guadalupe. It's so clear and there's a peaceful quality along its banks. Along with a few gnarly old trees, it has some pretty big boulders. 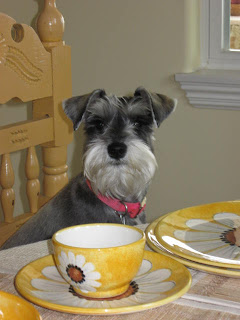 I spent a few days there with them and their miniature schnauzer, Dixie Chick. She is the sweetest little thing, and we get along famously. She's always happy to see me and keeps me well-entertained with her goofy antics. I think I'll post a picture I took of her when she was just a young 'un. It was taken at the breakfast table at their place down in Port Isabel. No, she isn't allowed to eat at the table, or beg for food while circling it. But, still, somehow she ended up there and she was just so cute ... which brings me to the next leg of my journey, here on the Gulf, where I've been for the past week.

Port Isabel sits on the Gulf,  just before you head over the Queen Isabella Causeway to South Padre Island. It's been a week of overcast skies, but much warmer than Minnesota, so it's been a good place to be. Palm trees and flowering shrubs and quiet walks at night along the canals off the Gulf make for a nice way to spend a week in December. The shrimp aren't bad either.

I head out shortly. Real shortly. I'm all packed and ready to go. Now I'm just stalling. Once I get in the car and get a few miles under me, I'll probably start singing Elvis Christmas songs. Good thing I'm traveling alone.

Posted by Teresa Evangeline at 5:13 AM