The Camel Ride I Didn't Take 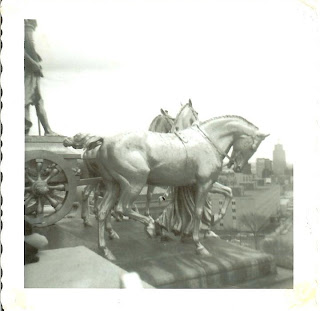 A few posts ago, I talked about my sixth-grade class trip. It triggered a host of memories, hidden by time, starting with the golden horses. When I was in Santa Fe recently, I went out to visit my stuff at my storage unit and to look for photographs that might be fun to use in illustrating future posts. Lo and behold, I ran across a couple of photographs I'd taken with my very first camera while on that trip. They were tucked in the pocket of an old suitcase - the golden horses on top of the capitol and one of St. Paul's Cathedral in the distance, taken from my perch next to the horses. I know the double-exposed one of my class and the capitol exists because I saw it not too long ago. I may have made the near-fatal mistake of using it for a bookmark. God help me if I really want to find it someday.


As I mentioned previously, standing outside next to these horses was exciting, but climbing the circular stairway, hidden behind an old door-way leading up to them, was the real adventure. I was a big Nancy Drew fan and this had all the ingredients of a mystery novel in the making. I made an attempt at writing a mystery novel when I was about ten, but I must have gotten distracted and The Mystery of the Swinging Potato Sack never got written. More about that, perhaps, some other time. 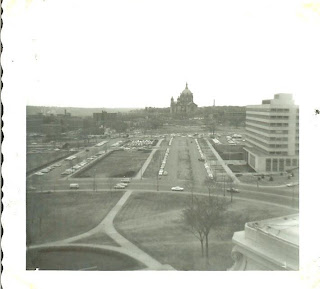 I visited St. Paul's Cathedral thirty years later and spent a wonderful hour or so wandering around inside, getting a feeling for the history that this place represents. And, although I am not a Catholic, I lit a candle in the stations of the cross passageway behind the altar for reasons that remain known only to me.There were several nice photo opps around the outside of the cathedral, angles and angels made out of stone.

Another memory it triggered was a previous visit to Como Zoo when I was even younger. I must have been five when my parents took Jane and me to a suburb of Minneapolis to visit my Aunt Gertrude, Dad's sister. A visit to the zoo was one of our adventures. Among the more memorable things were the very smelly orangutans, who performed for us in their own, uh, inimitable way, a bumpy, but wonder-inducing ride on a giant tortoise, and a camel, which I didn't ride. Shortly before we left, my dad was talking to the man who held the reins of this camel. Next thing I know, the man asked me if I wanted to ride him. In my fearful youth, I balked, shook my head no, and could not be budged. I remember wanting to, very badly. I kept looking up at it and thinking, 'How do I sit on him?'  My dad understood the value of having adventures and he wanted me to have this one, but my resistance could not be overcome. I, to this day, have a small wish that I had been a bit braver, had an actual ride stored in my memory bank. Years later, while attending a Renaissance Fair, I had an opportunity to ride an elephant and did not pass that up, remembering the camel ride I didn't take.

Posted by Teresa Evangeline at 9:39 AM