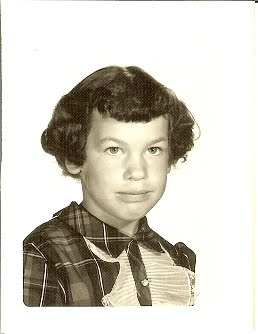 The year is 1959. As you might know by now, money was tight when I was very young. But, apparently, Mom had the funds for hair salons and permanents. The word permanent is scary enough for me, but Mom's home hair repair must have been scarier. I mean, how bad could it have been, that This was considered superior?

This all took place in a home salon in Walker. That means that it was in the home of the "beautician." I use that term loosely. It was all a front. My interrogator was a woman named Merle. That's right. Merle. I remember it well. Because I was scarred. And not by her name. It was the happy way she went about her craft as though she was blissfully unaware of the damage being done. And not just to my hair.

My sister and I did everything in pairs, so I would wait. And wait. While she went through her own tortures. It was interminable. For kids who ran around outside, from early morning 'til after dark, this clearly defied the rules of the Geneva Conventions.

The hair salon sink was, I believe, the first instrument of torture. "Pain in the neck" was coined by an early salon-goer. I still, to this very day, do not want my hair washed in a salon. With all the advancements in the world, how can it be we are painfully stuck with hair salon sinks that suck?

Then, there was the smell. Egads! That smell! I couldn't stand to be around myself! I did play alone in the woods a good deal of the time. I think I'm still suffering from the effects of being chloroformed. Or whatever that was. It would explain a lot.

You think you've had bad hair days? Try bad hair years. Thank God the '60's came along and I went with the Cher look. Straight hair, no bangs. It must have been a reaction to the terrorist practices of The Permanent Years.

The picture posted is me. Six years old. First grade. I cut my own bangs for the picture. Can you tell? I think it has sort of a New York art gallery look to it.

Posted by Teresa Evangeline at 11:30 AM