A Taste of Terlingua

Terlingua, 1936. We were a few years too late for its heyday, when burros may well have outnumbered the townfolk. Just down the road from the western edge of Big Bend National Park, it's an old town of ghost houses, piles of rock, and loose foundations lying scattered around like the ruins of some lost civilization. There's one trading post, a cafe-theater and other remnants of a town that used to be. Having heard of it, but never been, I was drawn in by the very things that also drew me into the canyons of Utah: walking among the ruins, photographing windows and doorways, the feel of history beneath my feet and all around me. It could easily have been a town in Old Mexico. We were just on the other side of some arbitrary line drawn in the sand, back when borders were being made, as Tommy Lee Jones said during the making of "No Country For Old Men." 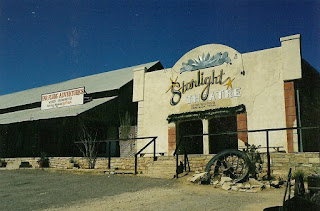 We climbed up onto the ramada of the trading post, a pleasant place that felt incongruous against this backdrop. Looking around inside was like looking in so many other tourist stops along the road, but this one felt different, like anything could happen. It was what was left of the really old southwest, what was left after the last cattle drive north. I looked around a bit, perusing books of photographs that pulled me into their language, the language of light. I lived there, in that light, for awhile, and then felt pulled back onto the ramada. I wanted to just sit and see what would happen.

It was like a scene out of a Larry McMurtry novel, as though he'd sat there, too, and Lonesome Dove had been born. I know that's not true because I know he was in another small town in Texas when he saw a van with lettering on the side that said, Lonesome Dove Baptist Church. That was when his writer's block let loose and we all know the rest of that story. I fully expected to see pigs rooting around in the dirt, raising hell with a snake they'd cornered, Gus coming around the corner, spittin' tobaccy and saying, "Igod." Instead, a young man came up, sat down at the end of the long row of benches, pulled a guitar out of its case and started singing Bob Dylan's "Man In the Long Black Coat." It happened to be one of my faves from his album "Oh Mercy," which is now, I believe, a classic. It had been a long dry spell for Dylan and then he came out with this thing that knocked the socks off fans and critics alike. I sat and listened, soaking up all that moment had to offer. Here is a link to a video of it, in case you'd like to listen, too: http://youtu.be/m3IXEEckZz4

Jeeps started pulling up and folks were getting out, happy, tired, not-so-fresh, just off the river. River rats, the men who had taken them down the river on an adventure and, hopefully, a new way of seeing, were still quietly giving directions. Suitcases were laid out on the ground, fresh clothes were fast becoming a priority. I watched this scene for awhile and then the group started to disperse, slowly moving towards their vehicles and to a life that probably didn't look so fascinating to them now, feeling, perhaps, that the river was really their home and now they were returning to something that didn't quite fit anymore. I wished for them a new awareness of the possibilities. 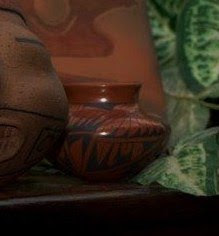 My companion had moved across the road to visit with a young man who was working among the ruins, lifting rocks into place. He was building his own kiva, a ceremonial room much like those of the Anasazi we'd seen so often in Utah. It made us happy to know that a young man would put his attention to such an endeavor. Not an easy task.

Just before we left, we bought  The Three Little Javelinas, mentioned in the previous post, and a small Mata Ortiz pot we couldn't resist. As we were leaving, we realized we had front row seats to what surely must have been, in that moment, The Greatest Show On Earth: a sunset that burned through the evening sky and into our memories. A small crowd had gathered on the ramada to watch in quiet stillness. As it started to wane, everyone applauded, a standing ovation for beauty itself. 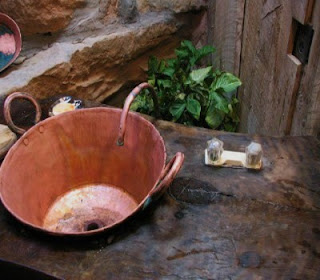 We made our way down the road, past the Flying Pig Cafe, landing at a campground a short distance away. We had been there a week or so earlier to take showers, knew that we'd want to come back. The bathrooms alone were reason enough. Cool copper sinks. It was on the edge of a creek and there was a place to have dinner. Turns out, the fun was just beginning. La Kiva is an underground bar/cafe that not only has the coolest entrance ever to a bar, but the best ambiance we'd ever found inside a bar. It also happened to have really good food and really good people to go with it. We were there on a Wednesday night. And not just any Wednesday night. This was their annual open mic night party, where folks from all over came to play and sing. We had dinner and waited for the fun to begin. 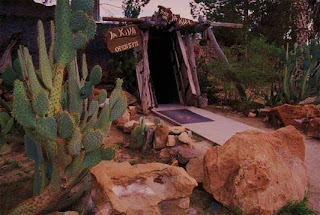 What a motley crew of amazing talent it was. It included a man who looked like he'd just stepped out of a Ralph Lauren ad, but instead he sat down and played the autoharp. Beautifully. Then, there was the woman who looked like my son's second grade teacher who played electric guitar and belted out "Born to Be Wild," better than anyone else ever has. Ever. I mean it. Turns out she was a local elementary teacher. There was also a young gal who played the fiddle and sang some country. She was very good and accompanied by first rate musicians. A man who may well have come over from Mexico for the night, played and sang a song in Spanish. That alone made the night seem magical. Then, one of the river rats I recognized from earlier stepped up with a guitar and sang a song by someone I'd never heard of, "Pull the Lever Down." It was about a prisoner on death row and it was so plaintive and sorrowful it made my heart ache with its sad, sad beauty. He came over and sat down to visit with us afterward. I was able to get info on the song and tell him how moved I was by his rendition.

Later, on the way back to the van, we looked up at the night sky. A blanket of stars surrounded us.

The next morning, we moved further down the road, heading for Bisbee, Arizona, and more adventure.

Posted by Teresa Evangeline at 11:59 AM