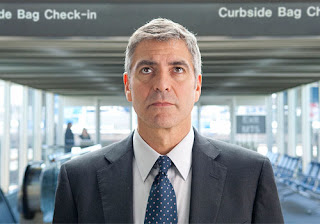 I went to the movies yesterday. I'd been wanting to see "Up In the Air," with George Clooney, since it first came out and was afraid it would never arrive in this area. Yes, part of my desire to see it had to do with George, but I'd also read that it's a good movie, very relevant to our times, and it was made by Jason Reitman, who made "Juno," one of my favorite movies of recent years. I've been missing the movie-going options of Santa Fe, where on any given day you have your pick from the latest mainstream movies, recent documentaries that have intriguing topics, or foreign films, new and old; figure out your mood and you can pretty much find a film that will sustain it, enhance it, justify or alter it, depending on where you want to go with it.

I've also developed a bit of a hobby around my love of movies and theaters. Every year I try to watch, in a theater, every film that's receiving Oscar buzz. Then, on Oscar night I arrive in Hollywood via my television, ready to enjoy all the glitz and glamour, ooh and aah over all the right dresses, and wait for all the Big Moments. My big moments may not be remembered as anyone else's, but they brought tears to my eyes, sometimes big elephant tears.  Right now, as I type this, I remember Chris Cooper accepting his Oscar for Best Supporting Actor in "Adaptation," a film about orchids in the Florida Everglades, among other things. He made it with Meryl Streep, whom he mentions so sweetly in his speech, big tears in his eyes. I suppose I thought of him because I saw a trailer for a new film he's in while waiting for "Up in the Air" to start. Which brings me back to the real subject at hand.

I'd read a few reviews of this movie, all alluding to the timeliness, given all the lay-offs and terminations that have taken place in the last year or two. Every time I think of well over six million unemployed people in the United States I ... can't even finish this sentence. Yes, that is definitely a theme in the movie, but it's not The theme. The theme is loneliness and how we cope or don't cope with it, how we choose to connect, or not. George plays a character named Ryan Bingham who does motivational speaking, along with flying all over the country to act as a hatchet man for those companies who need to relieve themselves of some overhead. Overhead, in the form of people. His "motivational" speaking involves a  backpack sitting on a nearby table, a backpack in which he asks the audience to, metaphorically, stuff all their ... stuff. And then set it on fire. Which gave me pause for thought. I thought, how many backpacks have I set on fire in my life, and, even more important, how many more times will I set my backpack on fire? At what point do I realize, too late, that I put something in the backpack that didn't belong there, or that I wish I hadn't?  Little things. Maybe a house, maybe a relationship. See where I'm going with this?

I have spent most of my life in one relationship after another since I was a teenager. Some of them were marriages. Some were short-term, some not so short. Each time I thought this is the One, or a reasonable facsimile. Reasonable enough to keep trying, even when the Universe set up road block after road block, one fallen tree across the road after another. I just pulled out my metaphorical chainsaw, cut it up, hauled it home, told myself it would make good firewood. I was not to be deterred and my listening-to-the-Universe skills were not as sharp as my chainsaw blade.

And then, weeks or months, or maybe even years later, I would move on. The open road would call, the wide horizon would beckon, something didn't feel quite right, it didn't fit as well as I thought it did, I would realize I'd made a false decision, and my life would, once again, be full of options and possibility. Up in the air.

So, now it's been going on four years since my last relationship, the kind where you have ongoing companionship, someone with whom you can to go to the movies, laugh with in the kitchen, exchange a quick hug passing in the hall, have dinner with in the evening, talk about the day, talk about the world. Like that. If it sounds like I'm whining, well, I am. Sometimes I get tired of being alone. I can hear your chorus now: what I would give to have the ability to make all my own decisions about how I spend my time, how I spend my money, what I eat for dinner, what movies I see, how I'm going to spend each and every day. Sounds wonderful, doesn't it? Well, it's not. Not always. Sometimes I feel very blessed to have all this freedom. Everyone deserves to have uninterrupted time; to make decisions about their life and how they want to spend it. A good relationship allows for that. I've had friends tell me they would love to have my freedom, love to be in my place, living with the flexibility I have, go where I want, when I want. But, I was talking to my sister in Texas awhile back and was describing my feelings around all this freedom. Both of us, at the same time, called up Kris Kristofferson's song "Me and Bobby McGee." Yeah. "Freedom's just another word for nothing left to lose." And then we laughed. There are days I love my life and there are days I would definitely trade with my married friends, friends who are less-than-happy some of the time, maybe even a lot of the time. But, they have someone to go to the movies and laugh in the kitchen with, all of the above, and right now, The Biggie, they have someone to spoon with on cold winter nights. Right after that rambunctious sex that can make huskies howl.

I know I'm whining and I should be grateful for my life, and, I am, most of the time. But, sometimes loneliness kicks in, and I'm reminded of how many backpacks I've burned. Last night, in the dark of the theater, I recognized myself. I'm not nearly as good-looking as George, nor as charming, but as the movie went along, I found myself being asked to take a deeper look at the real issues here. And see what I think. I think I found myself receding deeper and deeper into my seat. When the movie was over, I did my usual credits-watching, letting my reactions sink in. This time, though, when the credits were over I felt stuck to my seat, had trouble wanting to get up and leave. And it wasn't just the arctic cold waiting on the other side of the doors. It was also the empty efficiency I call home right now, waiting for me. It was the voices coming from the neighbors, talking, sharing, having someone to communicate with, someone to make the world feel, not just hospitable, but downright cozy.

My biggest moment of recognition came, though, when the movie was over, when I had to realize that I had made decisions that brought me there, to that moment. And, here's the important part: I can make other decisions. I know this.  I can agree to open my life a bit more, a whole lot more, to all the possibilities. I can stop telling myself I'm not any good at relationships. I can make an agreement with myself to nip every negative thought in the bud. Every moment that calls up the notion that I am lonely, without companionship, let it go without resistance; let it move away from me without examination or entanglement. Because I am not. Not really. In the classic, timeless sense of Life, I am surrounded by friendship and beauty and laughter and goodness. I have to keep choosing these things, to really see and feel them. Make it real. Because it is. Always has been. I just have to open my eyes and See it. We always have choices; choices of perception, choices of how we will respond to each moment. And that is how I aim to move through my days from here on out. Each moment I will make a choice to see and feel companionship with the world around me and remind myself, as often as necessary, it's not about a singular individual. It's about an abundance of ideas and those ideas contain everything I need, not just to sustain me, my life, but to move through it experiencing that abundance. In every area of my life.

Posted by Teresa Evangeline at 10:57 AM