The Fox and the Butterflies

Spring had come to Ansel. The lilacs were getting ready to bloom, kittens had been born in the hay shed and Coleman had shimmied his way up to the roof of the garage, binoculars hanging from his neck, to survey his kingdom and make plans for summer. He spotted two baby fox in and around the old house, out beyond the fence line. At the time, Coleman was into "The Fox and the Hound," a children's book, as well as a Disney movie. Copper and his pal had captured our attention and our affections, so seeing these two was a real treat. 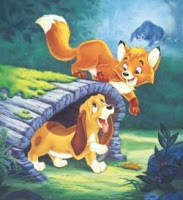 It was early evening and they were hanging out in the doorway of the gray, dilapidated house. One sat up and looked around, checking out his new world, while the other taunted him, desperately trying to get him to come out and play, but he ignored him. He just wanted to sit and Be for awhile. We stood very still ourselves and watched them from the fence line. After a few minutes, we quietly retreated. We didn't want Mama to see us and feel it necessary to move her family elsewhere, away from nosy neighbors.

Every spring contained more than one magical moment. One day, I felt the need to take a walk, go down the driveway, perhaps into the field and sit on the neighboring farmer's pile of rocks, made years ago while preparing the fields. It wasn't just any old pile of rocks. It was quite magnificent, really, and it wasn't just the rocks that made it so. If one sat still and listened, the sounds coming from that field were simply astounding. Later in the summer he would hay that field and there would be large bales all around and dotting the horizon, like the buffalo I like to imagine might have one time roamed those gently sloping hills.

On this particular morning, I was having trouble getting going. I'd had a rough night's sleep with too many thoughts pinging around in the ol' noggin. I desperately needed a break from my internal life. I needed to get out of my head and into the morning air. I felt an urgency almost, as though the Universe wanted me out the door, like Now. Timing was everything.

It was a beautiful day, not a cloud in the sky. As soon as I walked onto the porch it felt different, like the air itself was alive. As I walked down the tree-lined driveway, I noticed movement in the branches of the trees. It was a calm day, not much of a  breeze even, but there was definitely something going on in the trees. I looked around me, looked more closely at the branches. And then I saw them. Butterflies. Monarch butterflies. Hundreds of them, maybe thousands. Everywhere. Every leaf, every inch of every branch, was covered in butterflies. I quietly and slowly turned around in every direction. I was surrounded by Monarch butterflies. I stood perfectly still. Several came and floated around me, as though keeping me company. There was no other sound, and no other movement, except for the fluttering of butterfly wings. I cannot describe how I felt. Blessed doesn't begin to cover it. It remains one of the greatest gifts the universe has ever given me. Out of all the tree-lined driveways, in all the corners of the world, the Universe guided them to mine. On that day.

Posted by Teresa Evangeline at 8:28 AM