My Own "Island of the Blue Dolphins" 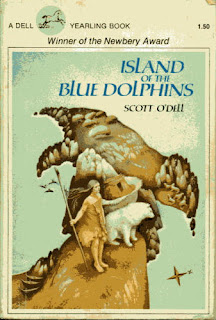 When I was an adolescent I felt caught between two worlds. There was the world that called to me from the future, asking me to sojourn into a place that was unknown, even a bit frightening. And there was the world I was still deeply attached to, where my true self seemed to live, a world of adventure, a bit of imaginative play, a life of living at one with the land, the woods and fields, my natural home. I felt a deep sense of disconnect with the new world that awaited. I was not ready to go there, a place my friends and siblings had already left to inhabit. I felt betrayed by my body, a body that had already arrived in that New Land and was waiting for me to catch up. It brought on strong feelings of discontent. It was a discontent that stayed with me for quite some time.

This thread of thought started this morning when I had a flash on a long-ago book and movie I had loved, "Island of the Blue Dolphins." It was written by Scott O' Dell in 1960, became a movie in 1964, when I was eleven. I remember reading the book, then spent that summer living on that imaginary island. I became Karana, living alone, stranded there for eighteen years, living off the land and by her wits. I set up a small piece of the yard, down beneath the far end of the clothesline and there I lived in my head and in my heart for more than one summer.

Perhaps you recall this story, the book or movie, from your own childhood. It's based on real life events that happened in the early to mid 1800's on the island of San Nicolas, one of the Channel Islands off the coast of California. A young Indian girl from the island village of Ghalas-at, along with what remained of her fellow villagers, was being taken to Santa Barbara after a deadly altercation with the Aleuts who had come to the island to hunt otters. Realizing her brother was not on board, she jumped into the water and swam back to the island. Soon after, she found her brother. He had been killed by feral dogs. And so, she was alone.

She created clothing from bird feathers, whale bones and seal skins, stitched with bone needles, using seal sinew for thread. She got drinking water from a spring among the rocks. As a child, I was smitten by her story, her resourcefulness, and how she grew to handle her eighteen years of isolation. She ultimately was able to befriend the lead dog from the pack that had attacked and killed her brother. He became her sole companion and, I cannot help but add, her soul companion.

Eventually, a ship returned to the island and she, having come to the understanding that life is meant to be experienced among her fellow beings, met it in her finest garb and willingly returned to Santa Barbara. Or so the story goes. Unfortunately, she did not live long after her return and I have often wondered if what must have been an extreme case of cognitive dissonance didn't make a strong contribution to her death. There's more to the story, of course. There always is. But, this is the gist and this is what is etched in my memory. It's what I took with me. 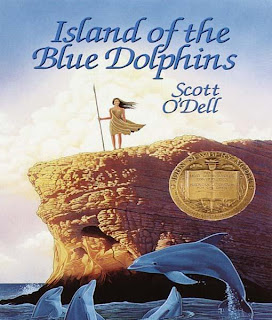 So, the summer I was twelve, after seeing and loving the movie, I was still spending time at the end of the clothesline, pretending to be on that island, feeling a deep affinity with Karana, and desperately wanting to remain there. It's as if I knew the waiting years would present challenges, challenges I wasn't sure I was equipped to handle. My self-assurance came from the woods, the land, my natural environment. I felt completely unprepared to meet the New World. I wanted to spend my days with the sun on my right shoulder, leaning into some simple task at hand. But, I sallied forth and fell into an uneasy peace with this other self, this self that was unfamiliar.

I sometimes feel that I am still trying to work the puzzle, make all the pieces fit. I suppose that's why I write. Looking at where I've been helps me see where I am with greater clarity and understanding. I am, as I sit here and write this, writing from the standpoint of discovery. I know, that as much as the image of an apartment in The Village In New York City still beckons from a small place in my heart, the place that meets my truest self is among the natural world, whether it's the desert, which was once a vast ocean, or the fields and woods. It's where I am most at home.

Posted by Teresa Evangeline at 3:28 PM