Ricky Nelson and the Back Road into Arches 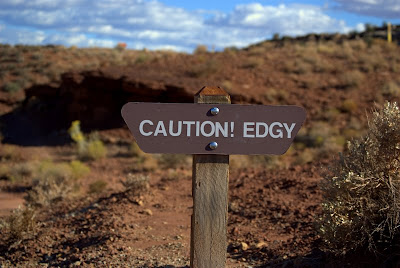 You haven't lived until you've been on the back road into Arches National Park with Ricky Nelson in the CD player. A few miles north of Moab there's a back road, more like a ghost road really. To the uninitiated it would seem you're just looking at the desert, but there is a road and it's a pretty cool one. I'm warning you, it does get rough. 4-wheel drive is not recommended, it is required. It gives "jostled" new meaning.

Fortunately, JB knew how to set the stage. He had been on this road before and knew the ropes. He also knows good road tunes are a must and he's very good at picking just the right thing. It's always the most incongruous thing, which is, of course, what makes it the right thing. We're in the business of memory making and that's the perfect way to do it. I bet if you think of a really good memory there will be certain music, a certain song attached. At least, that's how it works for me.

We set sail for Arches around mid-morning, the crack of dawn. My friend's a Virgo. Any questions? Adventure bound, we were still chatting away sans music as we drove down the open road. Then, it was "exit, stage right,"  and a few of the prettiest miles of back country you'll ever see; just this quiet timelessness and perfect peace that comes with a good stretch of road.

And then, the road took a turn for the worse. We careened. And we careened some more. Soon after I started silently complaining a tad about the road conditions. Well, I thought it was silently - he said he definitely could hear me. Nothing serious. Just wandering when it was all going to end. Or, at least get better. Something like that. I received some soothing words, some promises of better roads ahead. And then he skreeetched to a halt. And we piled out. It's kind of our m.o. He skreeetches to a halt, we pile out, and then we find or see something jaw-dropping, awe-inspiring, or head-scratching, or, you get the idea.

This time it was dinosaur tracks. A lot of them. Embedded in stone for, lo, these many years. We walked among them, I put my feet where they had stepped. We spent quiet time in distant thoughts of life a hell of a long time ago. It was so cool. When we got back in the truck, Ricky Nelson came on. It was magical. "Young World," of course, followed by "Travelin' Man," and, "It's Up to You," my list of favorites goes on. 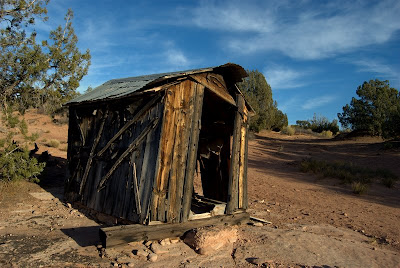 We stopped at a long-unoccupied, decaying cabin a sheepherder or cowboy probably used for a line shack. It felt like something out of another life and made for some dandy photos. We could well have been in a 1949 Chevy pickup truck headin' for Ed Abby's place up by Balanced Rock.


We got back in and drove on as Ricky played on, from "Poor Little Fool," to "Garden Party," all the way to Balanced Rock. We took some photos and walked around, even called on Ed's spirit to come out and play. Watched the light dip and fade. Then, piled back in for the breathtaking journey down: a winding road between towering red rock and the valley below. It was evening. And it was stunning. I could tell you about the colors of the desert, what I thought, what I saw, but it was nothing compared to what I felt. I felt beauty, everywhere. As far as the eye and the heart could see. 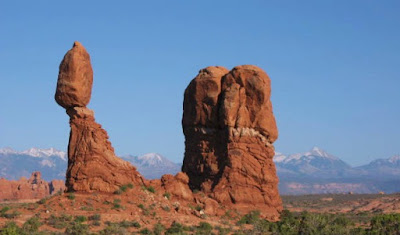 And that's what memories are made of.

For a nice b-cut that, I think, shows off his voice: http://www.youtube.com/watch?v=8WW5tSeyVE8

Posted by Teresa Evangeline at 11:59 PM