Crossing to Safety with Stegner 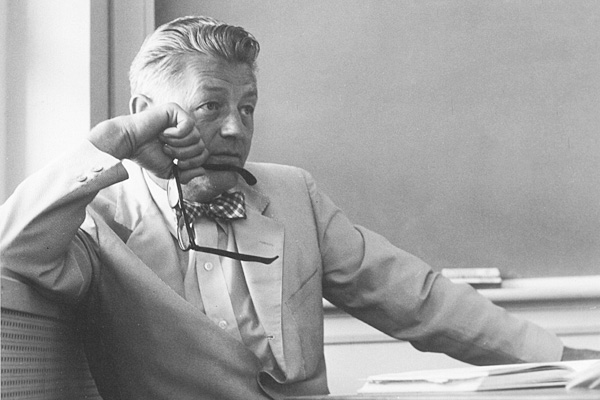 Sometime during the early 1990's I discovered Wallace Stegner and went on a mission to read everything he'd ever written. I couldn't get enough of this man's writing. Some writers are like that. They have a style that just flies off the page and into the imagination with the greatest of ease.

I think it started with a book I found out west in Back of Beyond, a bookstore in Moab, Utah. It was titled, Crossing to Safety. I usually open a book at random to get the flavor of the writing and if it sparks something in me then I  take a chance, often falling into it with great contentment at having found something I could sink my teeth into, if not my heart. Set in academia, this story of imperfect friendships that endure, despite all the reasons that time can create as to why they shouldn't, still rests on my shelf of favorite books.

For several months, I read one after another of his books until I was sated. Then, on a subsequent trip out west, I found a collection of his short stories in a bookstore in Santa Fe and my obsession began all over again. Each story was a perfect little slice of life. I read and reread them, and with each reading they settled into my bones a little bit more. I love the medium of the short story and how our imagination can create an entire world around one. 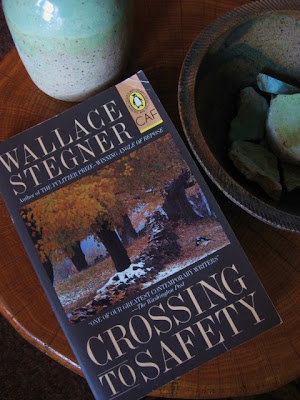 I haven't read any Stegner for some time now. He passed on in Santa Fe, NM, in 1993, as the result of a car accident. But I brought Crossing to Safety down from its shelf a few days ago and placed it on the stump next to my chair where I will consider reading it again. I'm a little concerned about what I might find. Some books are not meant to be reread; they are better left to the past.

I did, though, open it at random this morning, just to see what would turn up, and was pleasantly surprised. I opened it to where the main character is reading a letter from his wife. She's spending time at a summer house in Vermont with mutual friends, while he's spending his days immersed in English literature at the college where he teaches. In this passage she's writing to him about new friends that joined their circle the previous evening:

Comfort is terribly pretty and Lyle is one of the most fascinating men you ever met. You and he should hit it off. He comes from Arizona, and is a biologist, and works all over the world. He and Comfort were married right after he got his PhD. from Yale and they went straight to Alaska, clear up to Point Hope, and lived among the Eskimos...

Now he's given up arctic flora and is working on plants that have adapted themselves not to cold, but to drought. He's just back from several months in Libya, and he had all sorts of stories about caves with people and animals painted all over the walls, and a flint desert where the wind had teed up stones like golf balls, and when you looked, you could see that every stone was a tool left from a neolithic civilization that died thousands of years ago. I swear his clothes smelled of camel-dung fires....


Perhaps it was the reading of Stegner that prodded me into going out and having my own adventures, which include spending several years in the SW, exploring canyons, photographing ruins, and meeting some pretty interesting people along the way.

I found these photos tucked inside the book: 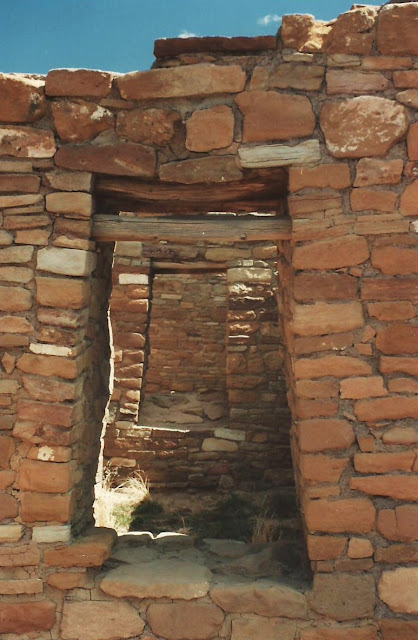 Doorways I fell in love with at Pueblo Bonito in Chaco Canyon, NM. (another copy of this photo found its way into my post, "Never Met a Door I Didn't Like").

And this one, taken at Zippel Bay State Park, in northern Minnesota, around the same time period.  I love old fence lines with wildflowers. 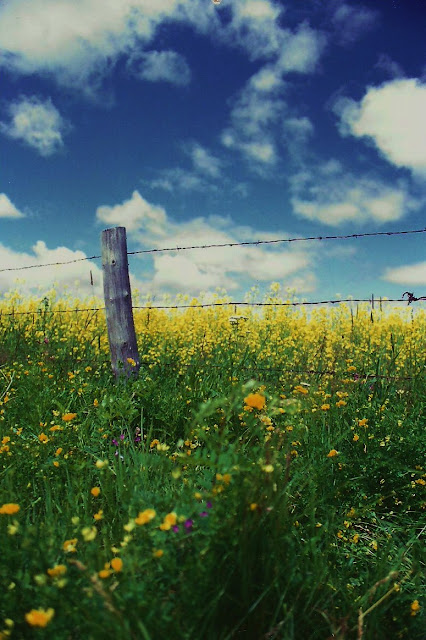 Posted by Teresa Evangeline at 7:09 AM