The Unbearable Sweetness of Being 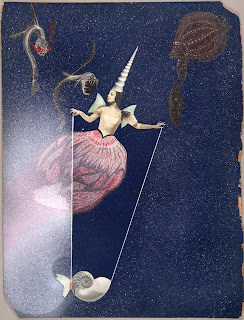 This morning, Buddy woke up first and sat next to me so I would know he was there. I reached out to pat his head, then slowly emerged from my nighttime cocoon. Perhaps he knew before I, that something was happening outside and we needed to be present to it. No, not the sunrise. It was too early for that. It was the moon being eclipsed and it had already started. As I stepped out onto the porch in the cold, dark morning air, I could see it sitting low on the horizon. I knew I had at least a half hour to watch the darkness spread across its face.

Just as I wished I could call Coleman to remind him (my son who also loves these celestial events), the phone rang. I ran inside, and it was him, calling to tell me! We hung up quickly so we could stay present to what was happening. I walked back outside to the apple trees beneath my kitchen window, the place where so much seems to happen, and got still, very still for a few minutes. As I stood there quietly watching the changing face of the moon, I recalled a Camus quote I had written in a notebook a few nights ago:

She was breathing deeply, she forgot the cold, the weight of beings, the insane static life, the lone languish of living or dying. After so many years running from fear, fleeing crazily, uselessly, she was finally coming to a halt. At the same time she seemed to be recovering her roots, and the sap rose anew in her body, which was no longer trembling. Pressing her whole body against the parapet, leaning toward the wheeling sky, she was only waiting for her pounding heart to settle down, and for the silence to form in her. The last constellations of stars fell in bunches a little lower on the horizon of the desert, and stood motionless. Then, with an unbearable sweetness, the waters of the night began to fill her, submerging the cold, rising, gradually to the center of her being, and overflowing wave upon wave to her moaning mouth. A moment later, the whole sky stretched out above her as she lay with her back against the cold earth.
~ Albert Camus


As the eclipse slowly covered more of the moon, I lay down under the bare branches of the birch tree, against the shadowy, dark roots spreading beneath it, closed my eyes and felt the cold earth against my back. I could almost sense the movement, the slow tilting away, as the moon fell below the horizon and out of sight, leaving the total eclipse to those further to the west.


Note: The title is taken from a wonderful Milan Kundera novel titled, The Unbearable Lightness of Being, about two men, two women, and a dog, in the Prague Spring of 1968.

Posted by Teresa Evangeline at 8:47 AM