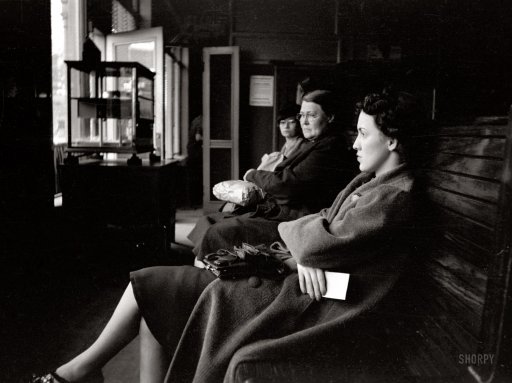 While looking over images taken by the Farm Security Administration photographers, I kept being drawn to those by John Vachon. So, I wasn't surprised when I saw his picture and felt a sort of kinship with him. This happens sometimes, both in person and through photographs. I did a little more reading about him and found that he was born and raised in St. Paul, Minnesota, receiving a bachelor's degree from St. Thomas College in 1934. 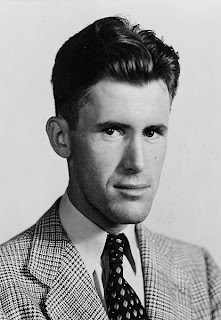 A couple of years later, he went to work for the FSA in Washington filing the many photographs taken by people such as Dorothea Lange. This, of course, piqued an interest in photography. After spending his weekends on the streets of DC with a borrowed Leica, encouraged by folks such as Walker Evans and Arthur Rothstein, he joined the ranks of these noted photographers in 1937. The rest, as they say, is history. 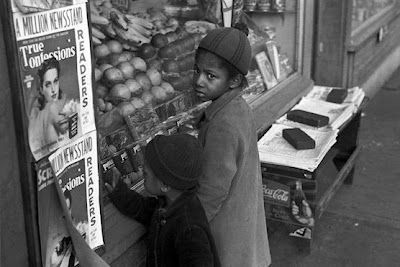 As I was reading this, my imagination went to work creating a scenario where he would have driven by our farm, just off the highway, sometime around 1962, on his way to Bemidji where he took a photo of a used car lot with Paul Bunyan at the gate (yes, the photo was taken in 1939, we're pretending here). Paul Bunyan was a pretty big deal in Minnesota back when I was a kid, this larger than life, folk tale lumberjack. For several summers, we would ride the train up to Bemidji to visit our cousins for a few days, a visit which usually included an afternoon at the Paul Bunyan Amusement Park.  We loved riding that train, just my sister, Jane, and I. My mother's second cousin was the conductor, so we had someone to look after us along the way. We rode those rails as the brave adventurers we imagined ourselves to be. 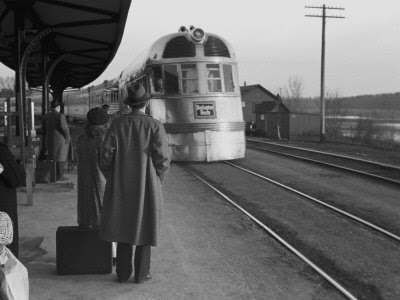 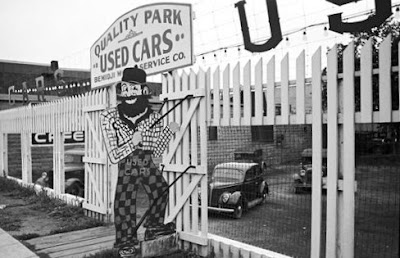 I like to think that Vachon, all those years ago, might have stopped in our parent's cafe that was just up the road from our farm, in yet another small town on the main highway that runs between St. Paul and Bemidji. Maybe he had a stack of my mother's pancakes for breakfast, or he'd come through in the evening and had supper, fried chicken being the calling card. It didn't matter that he'd moved out east long before that time. I placed him on that highway as a way to have him come to life for me. And he did. 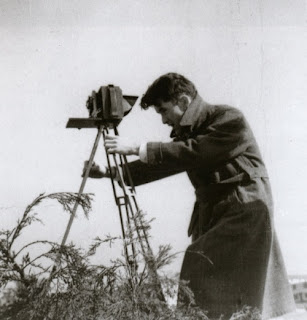 I was taken back to an evening when I was probably around six or seven years old. My parents, in a very atypical moment, decided to go out for the evening. Where? I have no idea, but they were away and it was just we three younger siblings at home. Shortly after they left, we noticed that several cars seemed to be parked at the corner where our country road met the highway. It was so out of the ordinary that we started speculating about it, and in my little mind I started imagining the worst: our parents had gotten into a car accident and would never be coming home again. I sat on my sister's bed, peering through the round metal headboard and out the window that was closest to the scene on the highway. 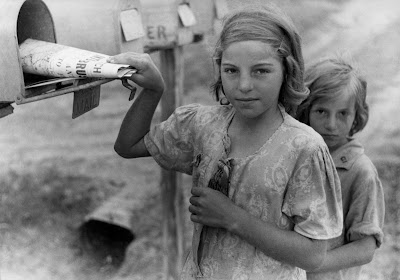 After a time of no answers, the oldest of the three of us, Christy, who was probably 12, was dispatched to ride the bike, yes, The bike, up to the corner to see what was going on. When she didn't immediately return, my mind went into overdrive. I had not developed any coping skills for such an event. Fear was the driving force and it hit me pretty hard. I might have prayed, 'cause that's what we'd been taught to do, but it didn't seem to alleviate my fear and I wasn't close to anything that remotely resembled peace of mind. I watched and waited. Eventually, after what seemed an eternity, but was probably no more than half an hour, Christy returned, and our parents shortly after that. 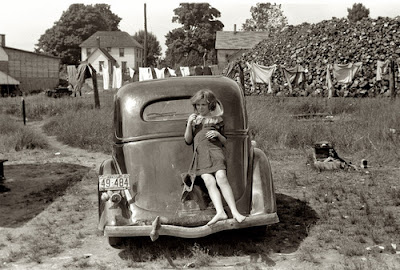 We found out that a bad car accident had happened just up the road and lives were lost. My parents had come on the scene just before arriving home, but had not been involved. 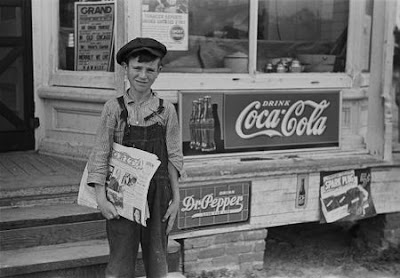 Some time later, I was up at the filling station on the corner, where my mom's best friend, Lu, and her husband, Hank, lived. I had become friends with her grandson, Michael, and together we would explore the woods behind the garage. It was there, in the woods, I saw the two cars with wrinkled hoods and broken windshields. One of them was a pea green color. Odd, isn't it, how the little details remain?  This all came to mind when I was looking into John Vachon's life. Perhaps it was just the idea of him taking photos while driving around the countryside in a car from that long ago era, or the romanticized notion that he may have driven right by our farm those many years ago. 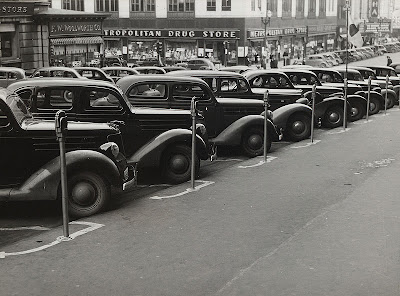 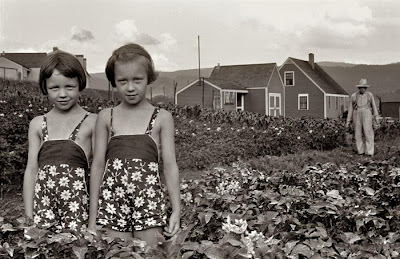 John Vachon went on to become a staff photographer for Life and then Look magazine, returning to Minnesota as a guest lecturer at the Minneapolis Institute of Arts shortly before his death in 1975. I love his photos of rural people and times, but, I have to say, his city scenes, especially those taken in the rain, jump out at me. There's something about city streets in the rain.... These photographs make me want to walk right into them, even with the rain coming down (especially with the rain coming down), on my way to a cafe, or a movie, perhaps "River of No Return," starring Robert Mitchum and Marilyn Monroe, for which Vachon was the sole photographer while they were on location in Alberta, Canada. 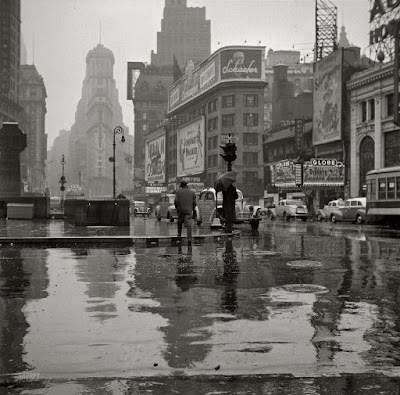 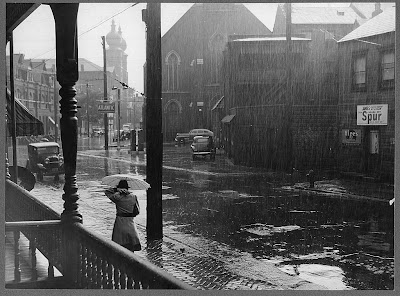 And, although this all happened long after Vachon had completed his assignment for the FSA, we still would have made pretty good subjects for that whole rural poverty thing. 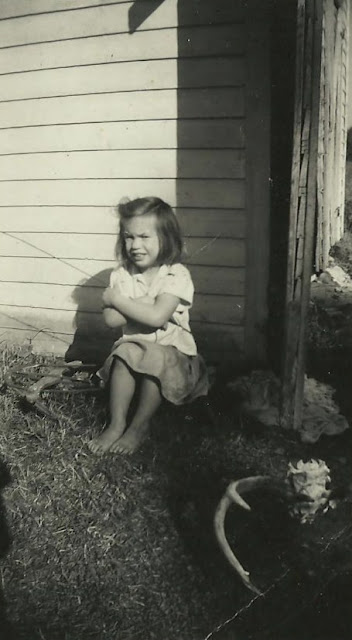 Yeah, that's me. The Bone Lady was beginning to form within.

All of the photographs, except for the one of me, of course, were taken by John Vachon throughout his career. None of his photographs are of people I know, but they could have been. These are among my favorites of his. They illustrate a time and place that sometimes seems like yesterday.

Posted by Teresa Evangeline at 12:02 PM