Drawing from a Deep Well 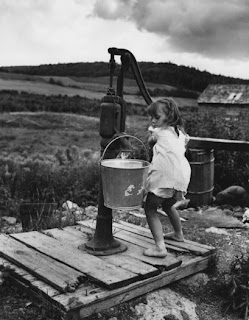 When I was a child, I pumped water from a well, on top of a wooden platform much like the one in the photograph. A few trees surrounded it, creating a sort of oasis in the summertime. I liked this chore, sometimes having to lean hard on the handle to draw the water up and into the pail. It would then sit by the porcelain sink in the kitchen, with a metal dipper hanging from its side. That water tasted so good. It was cold and clear.

When I was a child, I spake as a child, I understood as a child, I thought as a child: but when I became a man, I put away childish things. For now, we see through a glass, darkly; but then face to face: now I know in part; but then shall I know even as also I am known. And now abideth faith, hope, charity, these three; but the greatest of these is charity."

Posted by Teresa Evangeline at 9:53 AM