At the River's Edge 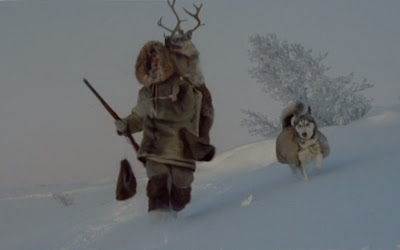 It's a cold and gloomy day, with a smattering of snow on the ground. A quiet seems to have settled on everything. It feels peaceful and good.

Last night, while watching a few videos from one of my favorite albums, Leonard Cohen's "Ten New Songs," I was reminded of when I was a child and my father did some trapping of mink and ermine in order to make ends meet. We thought nothing of it. It's what men did to get enough money to put food on the table, maybe some women did, too.

I would sometimes ride along with him when he'd go to check his traps. He would park near a bridge, on the shoulder of a dirt road not too far from our house, and walk along the banks of a small creek. Sometimes he would return with nothing, sometimes he would bring home one or two and then he'd skin and stretch them out on small boards made for that purpose.

Later, when I saw them on the boards, a smidgen of sadness would pass through, but I never took it any further than that. Never gave one second of thought to the fact that they would more than likely become part of a lady's coat. When you're young, you sometimes fail to connect the dots. At any age, we can fail to connect the dots. The news, on any given day, can attest to that. And, well, the late 1950's weren't exactly enlightened times. I'm not so sure these are, either, but I'll try to stay on track.

Anyway, I certainly hold no judgment of those who trapped then, nor of those who do now. There are those who feel it's essential for wildlife management. I don't know enough about that to have an opinion even. I love wildlife, emphasis on the life. That's all I know. And, I didn't decide to post this video because of the trapping aspect, although it is taken from the foreign film, "The Last Trapper,"  but because I found it to be quite beautiful, a visual treat, and Leonard Cohen is always worth a listen.

Though I take my song
From a withered limb,
Both song and tree,
They sing for him.

Posted by Teresa Evangeline at 3:30 PM