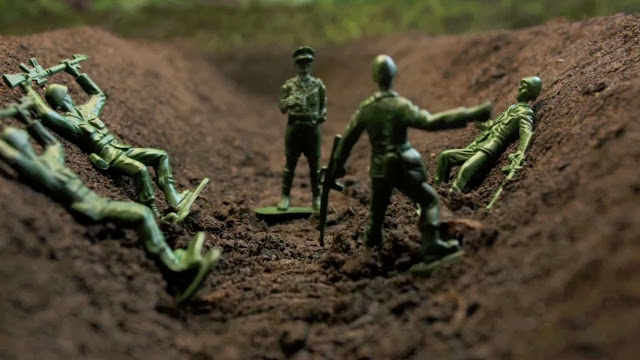 We seem to spend a lot of time thinking about the transitions young girls face as they go from childhood to womanhood. We have not spent as much time considering the challenges boys face as they enter manhood; the expectations and fears it surely must engender are all too often taken for granted. I did  not grow up having to think about what would happen if a war came and I was called to "duty." It should not be anyone's duty to kill for us or destroy an enemy we have not come to know. At one time, a long time ago now, soldiers were required to know their enemy. They had to learn about their culture; who they were as a people. It was only a slightly more honorable way to enter battle, if one can ever use the word honor as it relates to killing one's fellow beings, no matter the accepted reason.

When my oldest son was young, in that between place around age thirteen, he and a friend were behind the house one summer day playing with toy soldiers. They lined them up on the rock wall and went through whatever scenarios faux soldiers go through on their way to victory. I could barely hear them from inside the house and didn't pay it a lot of mind. I knew my son and life as a soldier was not being entertained as an acceptable future. They were just playing, I told myself, as I had done with toy cowboys and Indians on the floor of the living room a whole lot of years earlier. The problem with this lies in what it consciously or unconsciously teaches: to view others as potential enemies, as The Other.

At some point they reminded each other the county fair was that evening, and lying on the swimming raft for a while to catch some sun and get a little tan might be a good idea. This was followed by the names of some girls they knew. Soldiers were left at their posts and they came inside to change into swimming trunks.

Neither of these boys ever had to serve in a war, but many have. Some came back, too many did not. One is too many.


They’re caught in awkward poses,
one arm outstretched as if to fire,
legs parted and forever stuck on a swiggle
of support, as rigid and green as the boots.


This one has impressions of pockets,
a belt, a collar, a grip on tiny binoculars
intended to enlarge, no doubt, some
tiny enemy.


In back, attached to the belt is a canteen
or a grenade (it’s hard to tell). The helmet
is pulled down low, so as to hide the eyes.


If I point the arm, the gun, toward me,
I see that this soldier is very thin.


It’s almost unreal, how thin he is.

Posted by Teresa Evangeline at 10:00 AM