Tales from a Construction Zone 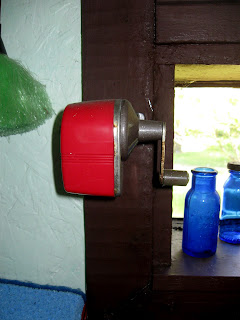 My memories of fourth grade are few and far between, mostly because I blocked them out. It was the first time I'd run up against a teacher who seemed to have spent her life being angry and feeling short-changed, maybe even taking the not-so-occasional nip or two. I didn't know that at the time, of course, I just thought she got mad easily. I tried not to rile her feathers, but even the occasional errant question could send her into a tailspin. However, those times are not what stick out; a few others hold that position. Some will be talked about, some won't. Of those that will, one includes a single brown glove, another involves (speaking of sticking out) missing teeth.

It was a cold winter morning, Mom was at our cafe, so Dad became the in-charge person to make sure we all got out the door on time and appropriately dressed. As always, I was the cow's tail. Just before heading out I couldn't find my gloves, and so, Dad, in his infinite wisdom, arrived at what he saw as the perfect solution, and which I saw as the most horrific. Brown work gloves. Just what a budding adolescent wants to wear, especially when she has a crush on a boy with black hair and sad brown eyes.

He put them on my hands under a bit of duress, and out the door I went. En route to the bus, now waiting at the end of the driveway, I managed to get them off my hands and stuffed into my coat pockets before I could be seen. I wasn't at the stage where I might humorously pass them off as an edgy fashion statement. Blending in was essential.

At some point in the day, I went to the lockers in the back of the classroom to retrieve something or other and walked away without checking my back trail. Next thing I knew, Teacher was waving that darn brown glove around the room and asking to whom it belonged. Nobody said a word. It belonged to no one. I sat mute. Guilt descended. How did I go home with only one glove?  Scarred, that's how I went home. I'm still talking about it.

The other incident involves he of the black hair and sad brown eyes. Billy was his name. It was spring, we were outside having recess, when the bell rang telling us it was time to go in. I went one way, he went the other, resulting in a head-on collision. He got a gash on his head (created by my teeth), which required a few stitches, and I got one of my front teeth knocked out, the other to follow a few months later due to the damage done. This was not all horrible news, however. Life has its funny little ways.

You see, I had slightly - only slightly, I tell you - protruding teeth, with just a bit of a gap. I inherited these fine choppers from my father. I was no Bucky Beaver (aren't kids fun?) and so did not suffer the slings and arrows some kids were subjected to, but this may be the part where the term 'blocked out' comes from. Yes, I suppose the burden of proof does fall on me, so, here I am, fourth grade, pre-collision: 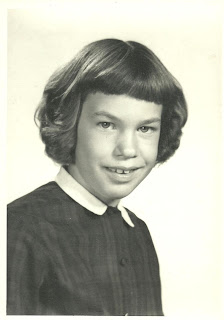 As you can see, good news. A bit of serendipity allowed me to have decent teeth, eventually, and without the fun of becoming Metal Mouth, which wasn't even a remote possibility at that point in our lives as a dental fund was not part of the family budget. As a matter of fact, it might well have precipitated my first visit ever to a dentist. More ensued. Many more.

And, the good news just kept rolling in. Billy called me that evening and asked how I was doing!  I'm certain his parents were involved in this great unfoldment. No matter, it was Billy on the other end of the line.

Life goes on, things change. Now, I wear brown work gloves proudly and with great satisfaction. My teeth have occasionally garnered compliments - especially gratifying when they come from a dentist. You can read more about Billy and our meeting again, in subsequent years, here:
http://teresaevangeline.blogspot.com/2010/10/to-indian-pow-wows-and-first-loves.html

What precipitated all this talk of fourth grade?  This great little poem I read a couple of days ago by a poet I was completely unfamiliar with. Yes, I do end sentences sometimes with prepositions, despite having been taught better.

On the first day of fourth grade, Mrs. Hunter
collected our penmanship samples to save

until June; by then, she said, we'd write
in the handwriting we would have all our lives.

Though she probably read that in a book
on child development, I was so excited

I could hardly stand it. In nine months
my adult self would be born, she would

send me a letter; in the way she swooped,
careened, and crossed her t's, I could

read everything I would need to know.
We were writing ourselves into the future.

We came closer each time we turned
the silver gears in the sharpener near the door,

the wood shavings tumbling inside,
smelling as if a house were being built.


~ Katrina Vandenberg, from The Alphabet Not Unlike the World, Milkweed Editions 2012

The top image is of a pencil sharpener, an artifact from an ancient culture, photographed in situ, which I found attached to a windowsill on the porch after my arrival here. It still contains the shavings Otis created, back when pencils were being used.


Posted by Teresa Evangeline at 11:54 AM