Let's Hear From the Amen Corner 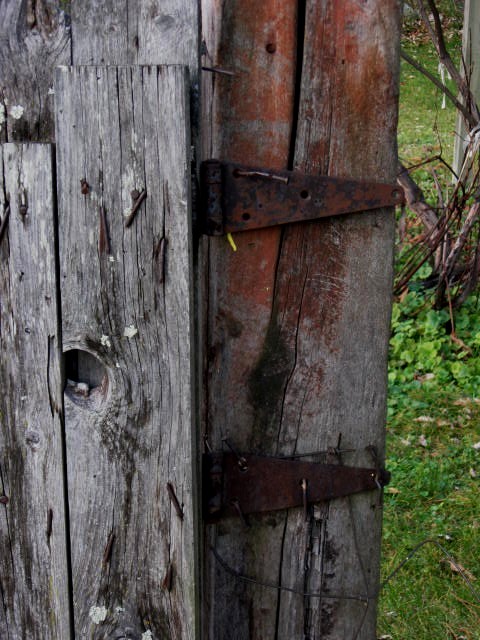 One of my favorite places to spend time indoors is the local hardware store. We're not talking a strip mall version of a hardware store or a Home Depot run amok called Lowe's. This is the real deal. It's been on the same corner of the same street for what seems like forever. I love walking down the cramped and worn linoleum-lined aisles, surrounded by all the things a person's life might truly need. It's where I go to buy lawn and garden equipment: hoes and hoses, shovels and rakes, seeds, onion sets, and my first wheelbarrow. It's where I bought Buddy's collars and leashes. There are a million wooden bins of nuts and bolts, screws and nails of any imaginable size or need. Upstairs is where I bought my first set of real living room furniture as a real live adult person. No more daybed, beanbag, boards and bricks. It's the place where people go in order to get things done. A place from which the human experience sets forth and lives are created!

Okay, okay. That last one may be a bit of hyperbole, but I really do like hardware stores - real hardware stores - and the real people you find there. Okaaay, I'll be quiet now, but you gotta promise to read this poem:

Where have all the hardware stores gone--dusty, sixty-watt
warrens with wood floors, cracked linoleum,
poured concrete painted blood red? Where are Eppes, Terry Rosa,
Yon's, Flint--low buildings on South Monroe,
Eighth Avenue, Gaines Street with their scent of paint thinner,
pesticides, plastic hoses coiled like serpents
in a garden paradisal with screws in buckets or bins
against a brick wall with hand-lettered signs
in ball-point pen--Carriage screws, two dozen for fifty cents--
long vicious dry-wall screws, thick wood screws
like peasants digging potatoes in fields, thin elegant trim
screws--New York dames at a backwoods hick
Sunday School picnic. O universal clevis pins, seven holes
in the shank, like seven deadly sins.
Where are the men--Mr. Franks, Mr. Piggot, Tyrone, Hank,
Ralph--sunburnt with stomachs and no asses,
men who knew the mythology of nails, Zeus's enthroned
on an Olympus of weak coffee, bad haircuts,
and tin cans of galvanized casing nails, sinker nails, brads,
20-penny common nails, duplex head nails, flooring nails
like railroad spikes, finish nails, fence staples, cotter pins,
roofing nails--flat-headed as Floyd Crawford,
who lived next door to you for years but would never say hi
or make eye contact. What a career in hardware
he could have had, his blue-black hair slicked back with
brilliantine, rolling a toothpick between his teeth while sorting
screw eyes and carpet tacks. Where are the hardware stores,
open Monday through Friday, Saturday till two?
No night hours here, like physicists their universe mathematical
and pure in its way: dinner at six, Rawhide at eight,
lights out at ten, kiss in the dark, up at five for the subatomic world
of toggle bolts, cap screws, hinch-pin clips, split-lock
washers. And the tools--saws, rakes, wrenches, rachets, drills,
chisels,and hose heads, hose couplings, sandpaper
(garnet, production, wet or dry), hinges, wire nails, caulk, nuts, lag
screws, pulleys, vise grips, hexbolts, fender washers,
all in a primordial stew of laconic talk about football, baseball,
who'll start for the Dodgers, St. Louis, the Phillies,
the Cubs? Walk around the block today and see their ghosts:
abandoned lots, graffitti'd windows, and tacked
to backroom walls, pinup calendars almost decorous
in our porn-riddled galaxy of Walmarts, Seven-Elevens,
stripmalls like strip mines or carrion bird's curved beak
gobbling farms, meadows, wildflowers, drowsy afternoons
of nothing to do but watch dust motes dance through a streak
of sunlight in a darkened room. If there's a second coming,
I want angels called Lem, Nelson, Rodney, and Cletis gathered
around a bin of nails, their silence like hosannahs,
hallelujahs, amens swelling from cinderblock cathedrals
drowning our cries of Bigger, faster, more, more, more.

Posted by Teresa Evangeline at 8:16 AM