Where the Lawn Meets the Meadow 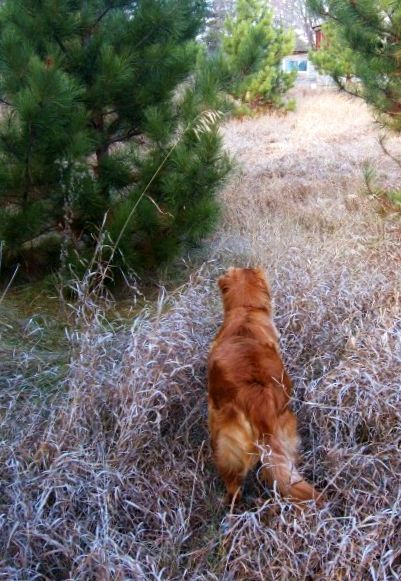 Spring is here and the red-winged blackbirds have returned, having arrived outside my kitchen window some time last week. They fly to the feeder every morning, flaunting their red and yellow shoulder pads, then leave it to the finches and several others that congregate there for the remainder of the day, not returning until early evening.

Several trumpeter swans flew over again yesterday followed by sandhill cranes, too high to see beneath a gray flannel sky, but not so much that I couldn't hear their distinctive sound. And last night, just after dark, I stepped out onto the porch in time to hear Canada geese passing overhead. I could almost feel their wings pressing them onward through the night.

The deer have gotten a little braver and I now see them browsing in the backyard just before sunup. Their droppings in the meadow behind the house, along with signs of a red fox I believe may be living nearby, have been joined recently by fresh bear scat. The path that the animals all seem to use behind the house, where the lawn meets the meadow, have more than a few indications of its return.

Buddy and I continue to take our walks in the meadow, then follow the fence line looking for crows in the field and on through the plantation of smaller Norway pines, most of which are now between fifteen and twenty feet high. They form a nice canopy for the deer where they bed down at night. I love seeing those little ovals of grass formed by their warm bodies. When the smallest of the ovals show up, I know that fawns have been born. I can well imagine the protection the small family of deer provides for them in case the coyotes venture too near. They all seem to have developed a respect for one another, no signs of otherwise, so I will continue to see it that way and hope they will, too.

Spring also means a return to yard work, but my friend, Anne Robey, from New Mexico, suggested we see this ongoing work as the work of eternity, which is really suggesting we keep it in the now, all that really exists. Having no constraints of time, except those we foolishly impose upon ourselves, allows us to let go with no expectation of anything but our growing awareness of the ever-unfolding beauty all around us.

Our mutual friend, Jamie Ross, an uncommonly fine poet, wrote last evening of his impending return from San Miguel de Allende to the cold, clear waters of the Vallecitos River that runs through the Carson National Forest near his home. He wrote of listening to our instincts and allowing the form of our writing to simply emerge. It's the season of returning.

For the past few days, I've had a song stuck in my head, a song from my much younger days, when George Jones was on every jukebox, as well as our turntable at home. I've been singing it to Buddy and, so far, he hasn't started howling. He has, however, spent an inordinate amount of time out on the porch. I'll spare you my version. Here's George:

Posted by Teresa Evangeline at 7:45 PM