Pink Lightning Over the San Juan 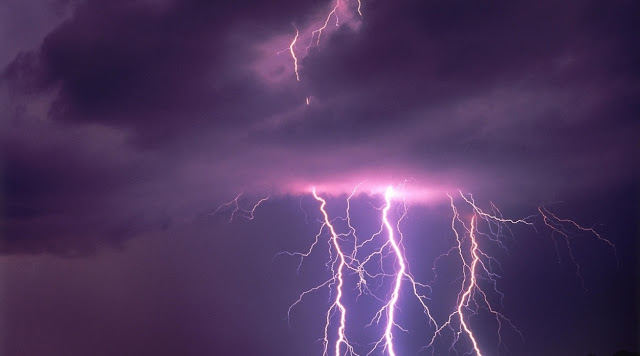 In the spring of 2001, JB and I were exploring the southwest, living out of a van and trying to keep from doing each other bodily harm. We'd spent the day on Cedar Mesa before heading to the Mokee Dugway, a dirt road (not for the faint of heart) that snakes its way along the edge of the mesa and down to the Valley of the Gods below. We'd taken this road many times and each time we said, 'Never again.'  But, there we were, arguing over who would drive and who would ride shotgun. Truth be told, I like to drive. And, if we were to go over the edge, I'd have no one to blame but myself.

Eventually, we arrived at the bottom, all in one piece, then took a break to check out a habitation site JB had spotted from above. In canyon country, that's what riding shotgun is all about, spotting habitation sites and the ruins of cliff dwellings tucked into canyon walls. He's better at it than I am. But then, he's had more practice.

Note: JB has been living in Moab, Utah for five and a half years now. During this time, he's been on 423 day hikes - he's a Virgo, he keeps track - several of them ten miles long. This is in Canyon Country. And he's almost 65 (he told me I could say that). Darn his desert hide.

A little further down the highway that runs through this valley, there's a side road which leads to Goosenecks State Park. There, at an overlook, the San Juan River winds through a gorge with a view that's almost a mirror image of the beautiful and breathtaking road we'd just come down. We arrived late in the evening, in time to take a look before dusk settled in.

We walked down a small, rocky path leading to a ledge and a somewhat closer view of the river. One could say we like living on the edge, or our version of it, anyway. While we were there, a storm started brewing. We could see it developing on the mesa across the river and, despite having some concerns, decided to watch for a few minutes. Awestruck by the pink lightning (that might be a poor choice of words), we stood there a bit longer than wisdom would dictate, proving Mr. Shakespeare right:  "What fools these mortals be."

Hugging the rock wall, we followed the path back to the top as quickly as that path would allow. By this time, we could feel our skin starting to tingle from the electrically charged air. Once we were safely ensconced in the car, we sat in silence and watched as, all across the distant mesa, deep pink lightning flashed again and again and again, against the darkening sky.


P.S. Today would have been Jack Kerouac's birthday.  You might think me mad (I won't refute it), but, sometimes, I feel as though he's here and we silently talk. Today, I touched a book of his poetry and ... I started to cry. I heard him say, "You can cry a thousand tears, sweetie, and it's still going to be just perfect."

Posted by Teresa Evangeline at 1:56 PM