Buddy and a Tale of Two Tulips 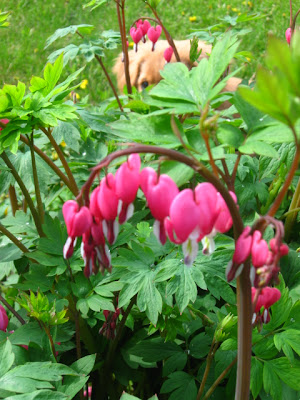 See that little face, hiding behind the Bleeding Hearts? He wants you to think he loves those flowers. It's not true. He's an opportunist and what he really has his eye on are two tulips, still folded in their greenery, almost ready to burst into bloom. Unfortunately, they will never see the light of day.

Late yesterday, after spending a good portion of the day defending the tulips from Buddy's adoration, like a gourmand feasting his eyes on a beautifully presented entree, we went into the house for the evening. Not long after, Buddy decided he needed to go out. It was raining pretty hard, so I thought, 'He must really have to go.'  I let him out, I thought to do his bizzness, and then watched from the porch as he made a beeline for the garden. Before I even had time to react, he'd latched onto the two tulips he'd had his eye on all day and down the hatch they went. As I walked emphatically toward him, berating him en route, he laid down in the dark earth, happy and fulfilled.

By the time I got to him, the game was on. Round and round the mulberry bush Mama chased the puppy. He hid behind bushes, running from one to another, jumping across the flower beds with new-found agility, managing to stay just out of reach. We covered a lot of territory in a short time. This went on for a couple of minutes or so before I finally gave up and walked back to the house, letting him know Mama was not happy. It went right over his happy head. Within seconds he was running back to where I waited on the porch, ears flapping, big tulip-eating grin on his face, as if to say, "Wasn't that a fun game, Ma?"

My temporary irritation melted into affection that cannot be denied. I love him, and that's that. More than tulips, more than anything in my garden. I know, I know, I may have to resort to tough love at some point. But, I'm not there ... yet.

"Tulips?  I don't know anything about any tulips. Oh, look, there's a bird!"


Posted by Teresa Evangeline at 11:27 AM