The Moon of the Green Apples 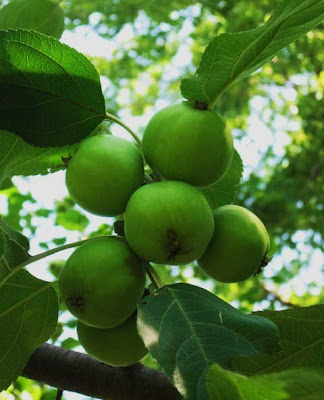 Full moons always seem so benevolent, as though they are reminding us, in some cozy, long familiar fashion, that all is right with the world. There's one rising over the old chicken coop as I write this.

Sometimes, when I'm outside at night and look up at the moon, I am awed by the thought that it's the same moon that's been seen by everyone who has ever lived in this world, from Lao Tzu and Marcus Aurelius to Galileo and Henry David Thoreau, and of course, Vincent van Gogh. There's something about these celestial events that, no matter how many times I've viewed them in my life, I never grow tired of them. Forty-one years ago tonight, we were probably still reeling from that remarkable and life-altering event of a few days earlier, man walking on the moon.

Late this afternoon, I pushed the wheelbarrow, loaded with debris from time spent cutting back flowers long past their bloom, to a spot near the woods that I've been using for this purpose. For the first time, I really looked around at the trees there. There are two apple trees, previously unknown to me, that have been quietly putting on fruit. Some are already turning red and  a few have either fallen on their own, or been prodded into it by whatever animal is leaving scat under the trees. In copious amounts. It appears to have become a regular hang-out for these apple-loving critters. Deer, I suspect, but am not certain. Thankfully, they aren't able to reach too far up into the branches. 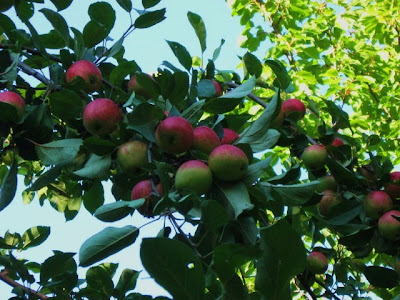 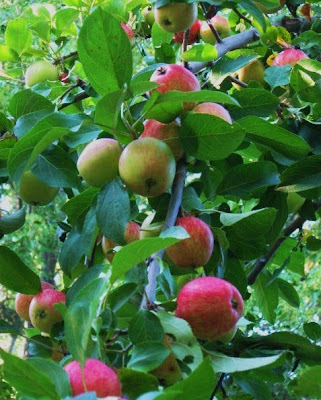 I also have a mini-orchard of four apple trees over by the cabin. Their apples are still quite green, but it seems there will be a bumper crop this year. I took some photos from under the canopy of leaves and with the sun shining through, it created a nice spot to spend a few minutes with my camera. 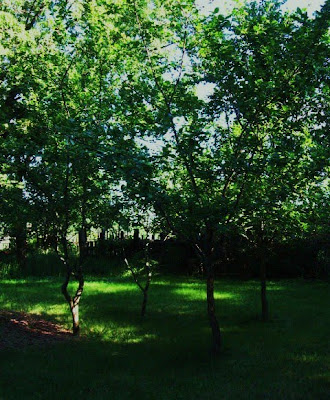 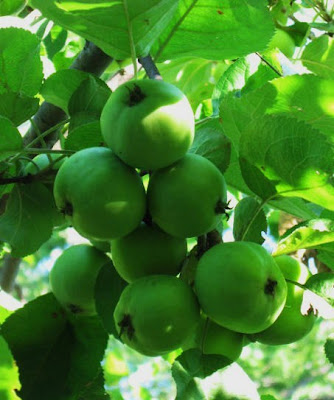 It was a raggedy little day. I had trouble getting going, followed by trouble keeping any momentum. It was a bit of this and a bit of that. I never got to the greenhouse, which I've been threatening to clean up for the past two days, to no avail. Just before dark, I walked outside as that full moon rose over the trees and watched as it rose higher in the growing night sky. What a beautiful way to close the day.

Turns out, there was more than one happy surprise to this day, there were several, and I'll be turning in tonight filled with gratitude for friends and family, the moon, and little green apples. 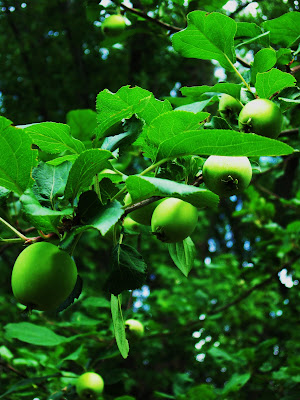 Posted by Teresa Evangeline at 11:13 PM