Cowslips in the Hall 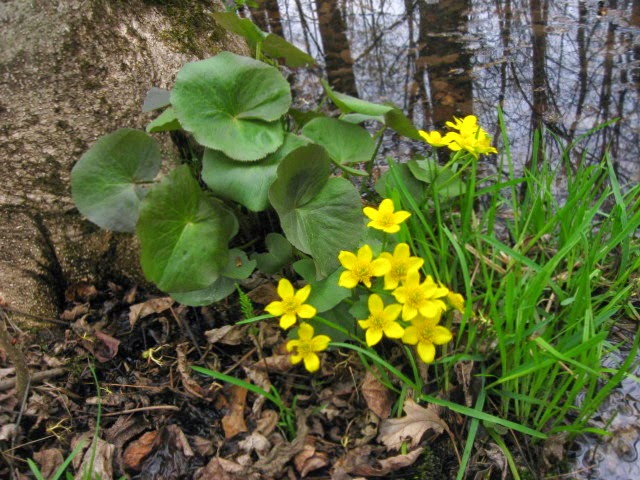 As we were finishing another school year, in the spring of '66, my sister and I and some of our fellow passengers on the school bus realized the cowslips were in bloom in a marsh along the road between my grandparents farm and the school. We were pretty animated about this discovery and asked the bus driver if he would stop and let us pick them. Lefty Summers, a wonderful bus driver who was willing to make safe allowances for the youth in his charge, agreed to stop the bus.

My sister and I, flower children from an earlier time, and a few older high school kids with brightly forming minds of their own - the beautiful, black-haired Dorothy among them - waded into the ditch and came back up with armloads of yellow cowslips. Then, amid unprecedented enthusiasm we rode on to school, talking to each other with a renewed joy for life apparent in the faces of everyone on that big orange bus. A few minutes later we filed out of the bus following a trail of unruly cowslips, strays that had fallen in the aisle between the seats.

Later, as I walked up the stairs and into the main hall, I saw cowslips strewn on the smooth hardwood floor in front of the principals' office - left there by some of the older kids along with drops of water from the stems. Out of the office came Lefty our beloved bus driver who had, it appeared, been called to task for what those in authority saw as a poor decision. He didn't appear upset, he just strode across those flowers and on down the hall. I stood there and watched, hoping he didn't pay a price or feel remorse for his choice. It was the best choice he ever made for this young girl's life.


My sister and I would sometimes bring cowslips to my grandmother, not for eating (although they are edible from what I understand), but for putting in a vase. I recently mentioned them in a two-part micropoem about an afternoon visit to my grandparent's farm:

... crossed legs cradle a favorite book / on the page a grizzly bear scoops salmon from a stream / afternoon seeps through etched glass

Cowslips are also known as marsh marigolds. The photograph is mine.
Posted by Teresa Evangeline at 12:56 AM