Light Action on a Minnesota Morning 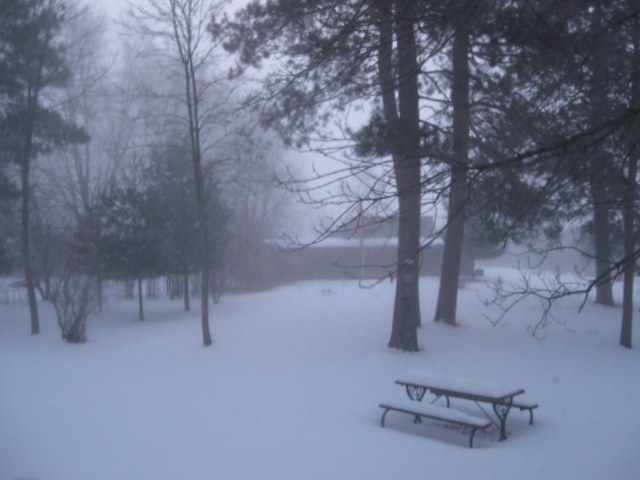 When I awoke this morning, a little later than usual after a good night's sleep, there was a mist hanging over the yard, the old chicken coop, and beyond. It was such a peaceful thing to wake up to I wanted to capture it so I could share it with you. Yes, I've taken its picture before. The beauty of really learning to see the world around me is in this very thing: I could photograph that coop every day of my life from the same place and always see something new, something slightly different from the day before.

Apparently, there is a big storm moving into New England and plans are being made. There is something very satisfying about being snowbound, if one is well-stocked and ready. All that snow creates a shelter in one's mind and a perfectly good excuse for shutting out the world for a while, something we could all benefit from now and then.

Not long after I arrived in Santa Fe, after turning the corner on the winter of '02, I went to a reading at a bookstore downtown, just off the plaza, called Collected Works. It had long been a favorite stopping place when traveling through in earlier times and I was very grateful I could now frequent it at my leisure. Barry Lopez, one of my favorite nature writers, was going to be reading from his latest book and I was very much looking forward to hearing him read and seeing him in person. I had a sense he would have very good energy, and I was right.

He spoke for a while about the world and the changes that had been wrought by recent events. I'm certain I'm not the only one in that small room who found his words comforting. Then, he read a selection from his book, Light Action in the Caribbean, followed by a brief period of questions. Afterwards, I took my place in line with the book I had just purchased while trying to keep at bay the anxiety that kept wanting to intrude. Another marriage had recently ended, 9/11 had changed the world, and my own view of it was riddled with angst. This did not go undetected by Mr. Lopez.

As I stood before him, the book lying on the table awaiting his signature, he stood and looked directly in my eyes. While holding both of my hands in his, he told me he hoped I would soon find peace and healing, and reassured me that life was a good place to be. His smile wiped away the tears that were threatening to fall and then he signed my book with a kind personal message. I have to tell you, the man has beautiful handwriting to match his beautiful soul.

This morning, I picked up that book and opened it to this:

My father, David Whippet, moved a family of eight from Lancaster, in the western Mojave, up onto the high plains of central North Dakota in the summer of 1952. He rented a two-story, six bedroom house near Westhope. It was shaded by cottonwoods and weeping willows and I lived in it for eleven years before he moved us again, to Sedalia in central Missouri, where he retired in 1975. I never felt the country around Sedalia. I carried the treeless northern prairie close in my mind, the spine-shattering crack of June thunder--tin drums falling from heaven, Mother called it--an image of coyotes evaporating in a draw ...

That first summer in North Dakota, 1952, the air heated up like it did in the desert around Lancaster, but the California heat was dry. The humid Dakota weather staggered us all. I got used to the heat, though the hardest work I ever did was summer haying on those plains. I'd fall asleep at the supper table still itching with chaff. I grew to crave the dark cold of winter, the January weeks at thirty below, the table of bare land still as a sheet of iron ...


These paragraphs were a good reminder of why I can, at times, still embrace living here in Minnesota and even love it wholeheartedly. The cold air and the fresh snow often bring the world into a much-needed balance. It also was a clear reminder of why I love words, how they're placed on the page, the sounds and the images they elicit as they roll through our minds and off our tongues. My lord, that man can write.


Posted by Teresa Evangeline at 9:13 AM