Moving Brush Piles in the Rain 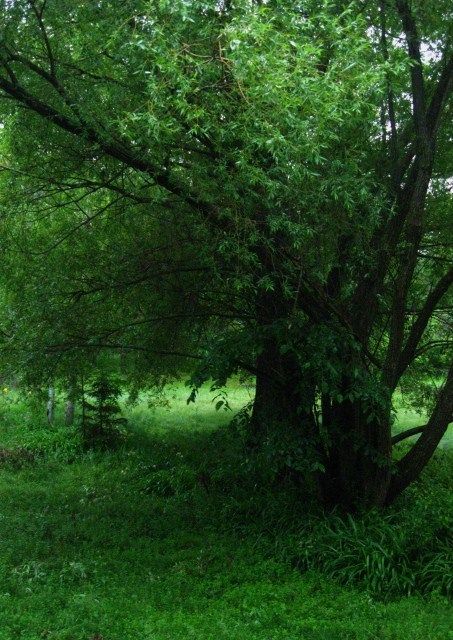 Before turning in last night, I stepped outside to listen to the river churning as it made its way around the bend and under the bridge. It's running high and fast this spring and I love the sound it makes in the dark. However. As I looked down in the hollow I could make out the silhouette of a brush pile I had spontaneously created when I first moved in here two summers ago and to which I have recently been adding. I could see, even in the dark, that the pile will be hiding the many irises that are getting ready to bloom. A couple of days ago I cleaned out a tire full of them that Otis had created nearby. Yes, a tire full of irises. There was a time when I might have blushed at that revelation, but now I view it as a fine form of recycling.

I actually have a few old tires in the back part of the yard that have been used for flowers in the past, before I arrived, that I'm cleaning out and planning to care for, as well as ten very large tractor tires that were used in creating another vegetable garden out near the road. I went by it two evenings ago on a walk with Buddy and thought again of reworking it, cleaning out the tires and planting potatoes in them. I've read where big tires are good for planting several things, potatoes first and foremost. Talk about a nice raised bed. Plus, when spring is in full bloom I will be working next to the lilac bushes which form that corner of my property, another nice bonus. We shall see ...

Back to the brush pile.

When I woke early this morning to the sound of rain and leftover feelings from some unsettling dreams, I thought again of that poorly placed brush pile and decided I should move it as soon as possible. I didn't want anything obstructing my view of the flowers. And as much as I actually like brush piles and the notion that they can be habitat for a variety of creatures, I knew this one needed moving.

So, while Buddy was still sleeping I quietly left the house, went into the rain and did just that. I can't remember feeling this happy about outside work. It was so peaceful and satisfying. As I worked, I thought about a Robert Morgan poem I had read many months ago. It's been waiting in the wings for the perfect morning to be shared. And this is the perfect morning.


"Working in the Rain"

My father loved more than anything to
work outside in wet weather. Beginning
at daylight he'd go out in dripping brush
to mow or pull weeds for hogs and chickens.
First his shoulders got damp and the drops from
his hat ran down his back. When even his
armpits were soaked he came in to dry out
by the fire, make coffee, read a little.
But if the rain continued he'd soon be
restless, and go out to sharpen tools in
the shed or carry wood in from the pile,
then open up a puddle to the drain,
working by steps back into the downpour.
I thought he sought the privacy of rain,
the one time no one was likely to be
out and he was left to the intimacy
of drops touching every leaf and tree in
the woods and the easy muttering of
drip and runoff, the shine of pools behind
grass dams. He could not resist the long
ritual, the companionship and freedom
of falling weather, or even the cold
drenching, the heavy soak and chill of clothes
and sobbing of fingers and sacrifice
of shoes that earned a baking by the fire
and washed fatigue after the wandering
and loneliness in the country of rain. 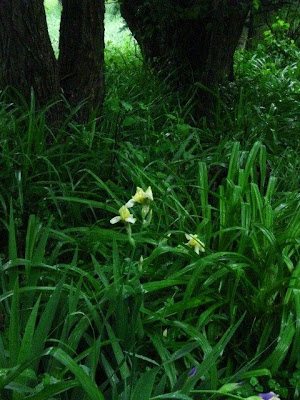 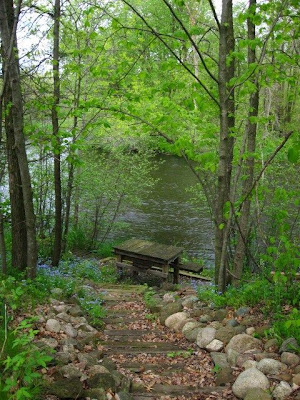 P.S. Robert Morgan is the same poet who wrote "White Autumn." Remember the woman in the rocking chair with clay pipe hidden in the cabinet?  Same poet.  Here it is if you'd like a reminder: teresaevangeline.blogspot.com/2012/01/everything-is-ok-just-way-it-is.html

The images were taken last year, later in the spring, when the irises were blooming and things had greened up considerably.

Posted by Teresa Evangeline at 11:02 AM