When It's Mushroom Picking Time in Minnesota 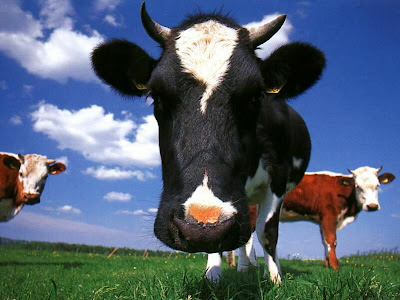 Back in the 1980's, I had a husband who knew his mushrooms, at least four different kinds, and one of our favorite things to do in the fall was head into the woods to do some picking. Rotten logs on the forest floor were prime real estate for those honey capped beauties. Depending on the year they could really be out in abundance.

One of those years a farmer we knew had a pasture full of them and we were invited to come over and pick to our little heart's content. The cows were guaranteed not to bother us. And so we arrived with brown grocery bags at the ready. We aimed to fill them up.

Within a very short time I realized I'd died and went to mushroom heaven right there off County Road 113. Mushrooms seem to like growing where there's poop and cows provide it in spades. No, they don't grow out of the cow pies but very nearby. Okay, they may grow out of cow pies but I have my standards. Actually, I did load up an old jeep with dried cow pies once for fertilizing my garden, but that's another story.

So much for standards.

Anyway, on this day my head is down close to the ground, I'm moving from mushroom to mushroom when I think my hubby has sidled up to me and is infringing on my territory (we mushroom pickers can be very territorial), and so I start talking to him without looking up. I say his name. No response. I say it again with a bit more of a questioning tone. No response. I try it one more time, this time with an edge of panic because something is definitely right in front of me now and I'm not sure I want to look up and find out what it is. But I do anyway. I raise my head, very slowly, only to come eyeball to eyeball with a large cow. Not a bull, mind you, but who's checking? I put on my happy face to show her there's no interloper here but she's not buying it. She's not mad, she's just not sure what my business is.

By this time we've drawn a crowd. More cows have shown up to see what Bossy is up against and are standing around waiting for the action to begin, see what the little lady is going to do. 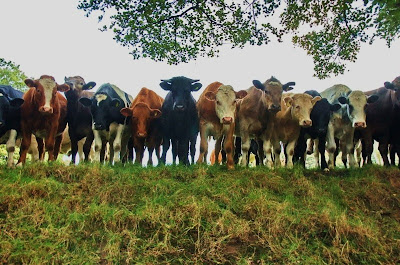 I slowly start backing away from the gang of cows, trying to make nice, but my feet want to hurry and my feet win every time. I'm off and running, dropping my bag of goodies en route, heading for the gate. The cows seem to think it's a good idea to run, too. And so they do.  I don't know what they're thinking, can't read their minds. I just see cows out of the corner of my eye. And they're chasing me.

Out of the corner of my other eye, I see George practically rolling around in the pasture with uninhibited glee. He's yelling, "Stop Running!"  This does not sound like a good idea at all and a little mean-spirited if you ask me. He repeats this, with the admonition that they will stop running when I do. Not to be dissuaded and not entirely sure he's correct I push on, all the way to the gate. Up and over I go. No time for niceties involving latches and such. Safely on the other side, I turn to check my back trail and see cows standing around looking at me as though I'd led them on a wild goose chase. This did not end in any way they might have imagined. They go back to being docile bovines and I feel foolish for about ten years, maybe more. After all, I grew up around cows, brought them in from the pasture many summer evenings and should know better. Amazing, how quickly it can go from,  "No problem, just cows," to, "Feet, don't fail me now."

What brought this on? That darn Annie and Roxanne over at  thegoodluckduck.blogspot.com  have posted pictures of a mushroom and a cow along with all sorts of other cool stuff so I threatened to tell my own mushroom and cow story.  Next thing I know I'm back here doing just that.  Now I have to go get my clothes off the line.

Just for the record: I went back and got my bag of mushrooms with my hubby as escort. As soon as he stopped laughing. When we got home we dried most of them in the sun and then a low temp oven and ended up with a big glass jar full of very pungent mushrooms. And they were very good. 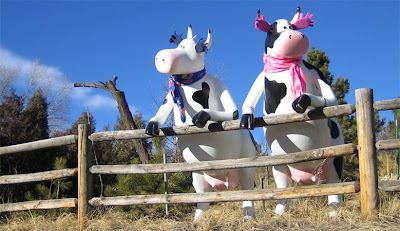 No, these are not my photos. I borrowed them from Mr. Google.

Posted by Teresa Evangeline at 5:42 PM