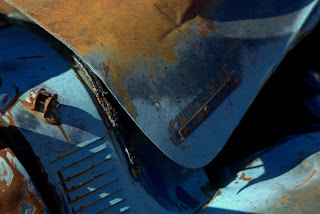 Yesterday, I received a photograph from my friend, JB, over in Moab, Utah. He had been out scrambling around on the red rocks, as usual, and ran across an old abandoned car that provided some pretty cool photo opps. I'm jealous. I spent much of the '90's photographing abandoned cars, abandoned homesteads, abandoned barns. Do you see a pattern here? I loved the details. The grill of the car, rusty dashboards, the shadow of Chevrolet or Oldsmobile still attached to the hood. A doorknob, a hinge, a reflection in a window. Old red gingham curtains, torn and tattered, left perhaps when the Mrs. passed from this life and things were never the same (I'm telling this story). I had photo opps that still tug at me years later, a few I didn't respond to and wish I had. I try not to look at life through a rear view mirror, but these deserve remembering. There were the yellow daffodils (are there another kind?) alongside an abandoned house outside Russell, Arkansas, gray and forlorn, except for that beautiful yellow underneath where the windows used to be. A sign outside an abandoned gas station (here I go again) still asking for the business of passers-by. Little slices of life that have come and gone.

I remember like it was yesterday, the day I got my first camera. Taking pictures had always been something someone in our family was doing. They had these old Brownies-in-a-box. Wish I had them now. It would be the base for what could be a burgeoning collection! Anyway, I longed for my very own camera. And money was, shall we say, tight. I was scheduled to go on my sixth grade class trip that week: state capitol, state historical society, planetarium, Como Zoo, my first escalator ride, stuff like that. Remember, I was a country girl. I had just woken up when Mom came in to give me my birthday present a couple of days early. And there it was ! My very own camera. I thought I'd died and went to heaven. I was so happy I could hardly speak. I know, hard to imagine.

Needless to say, my first efforts were less than stellar. There were the golden horses on top of the capitol. This was back in the day when you could climb a small circular stairway and get to the roof, right next to them, back before lawsuits became a favorite American past-time. There was the class picture, double-exposed against the state capitol itself. I'm pretty sure I ran out of film before I ever got to the zoo. I've never been known for self-restraint.

Now, I need to get myself in gear and do more photographing again. It might help if I actually read the instruction manual for my digital camera I bought over a year ago. I'm still stuck on film and that process. My head hasn't made the adjustment yet. I suppose I should get with the program. It's time. Digital cameras being what they are, I don't even have to show restraint! In this endeavor anyway. I do have a few photos I've taken with my digital camera that I rather like. I'll post some on my blog. What the heck. The one of the car at the top of this is JB's, though (I got his permission to post it). I couldn't resist showing you that blue.

Like all artistic, creative endeavors, one can get obsessed pretty quickly. In a good way. You want to stay in the flow, the energy, that seems to carry you along from idea to idea. Once you start seeing the world through fresh eyes, watching new vignettes of life unfold, life becomes a smorgasbord. I'll take a smidgen of songwriting, a photograph or two, a poem, a little of this, a little of that. There's a name for people like me. Dilettante. Skip past definition #1, i.e. 'superficial dabbler,' and go right to definition #2: 'a lover of an art or science, especially of a fine art.' That's the one. It's a working definition. That means I'm working on it. Right along with that self-restraint.

Posted by Teresa Evangeline at 9:15 AM