Merriam-Webster Is a Friend Of Mine 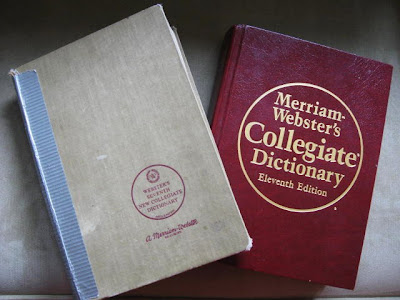 They are beauties, that's for sure, but I have many others I could add to that list. Countless. Words communicate ideas. Every single word carries with it that idea. How we talk with friends and how we establish communication via words carries weight, holds meaning. What I love most though is the written word. That's where dictionaries come into play, and I do mean play. I love a spirited but gentle debate over what a word means or how it's pronounced. Nothing like a good dictionary to settle the question.

Early last winter a dear friend and I had just such a debate over the word homage. He, like so many other misguided folks, wanted to use it with this faux French pronunciation that's been making the rounds. There is no such word as "Oh- mazh" (accent on the second syllable). It is homage, accent on the first syllable, with or without the h. Look it up. In a real dictionary. Which brings me to Merriam-Webster.

I like to imagine Merriam-Webster as a 1950's farm wife, sitting at her kitchen table in plaid cotton house dress, apron on, getting ready to fix supper, her full bosom resting on the table. She's writing in longhand, intent on getting just the right nuance to a word that crossed her mind while at the stove, meticulously recording it in notebooks for future generations.

M-W's Collegiate Dictionary has been my dictionary of choice for many years. It doesn't mean I don't like others, but I love M-W, the current one being the Eleventh Edition. My favorite, though, is Webster's Seventh New Collegiate, published by M-W. It's not just any dictionary. It once belonged to the Cripple Creek-Victor High School in Colorado. My ex was the janitor there in the early-to-mid '70's and when the school was razed for a new one some of the books, including this dictionary, ended up in the discarded pile. It still has the CCVHS Library stamp on the title page and glued in the back is the card holder, with card, for checking out Copy 17. He carried this beauty with him for many years accumulating notes and lists and various bookmarks inside as he went along. I coveted it. I mean Biblical covetousness.

Imagine my surprise when it arrived in the mail in April of last year as a birthday present from him. It came complete with his notes, lists, bookmarks and sundry other items that carry with them the kindness of memory. There was the sales slip from the t-shirt shop in Moab, Utah where we bought shirts for his sons on a vacation back in '92, and the pressed paper from a pack of cigarettes he bought on one of our trips into Mexico. His lists contained such items as "Barn Bluff, Red Wing - pix" and "St. Parks of the N. Shore." Words to look up included panegyrist, seigneurial, and the ever popular salacious. He knew what it meant. He just wanted to be sure. Life goes on and he lives in Moab now. I'm glad we're still friends.

Dictionary.com? Not for me. I want to go to a real one and experience life as it's meant to be experienced, in real time with real objects.

Posted by Teresa Evangeline at 2:12 PM