So Much is Happening Out There 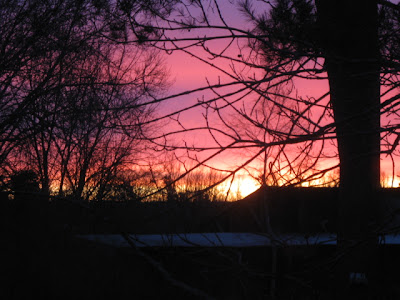 Early this morning, I mean really early this morning, even before the light was glinting off the metal roof of the old chicken coop, I was sitting here thinking about all that is going on out there, 'there' being the world of nature ... all the creatures sleeping in their burrows or nests, perhaps nestled in among their young ... those sleeping in the meadow and under the pines, or returning to their places of rest after spending several hours roaming the night ... and those who are waking to another day. And, I just read the perfect poem to fit these early morning thoughts ... but first, let me tell you what led to them.

Late yesterday afternoon I stepped outside to take the sheets off the clothesline and a bald eagle was soaring overhead. He visits quite regularly now, often landing on the scraggly pine tree at the end of the driveway. At about the same time Buddy was all excited by the chipmunk that lives under our porch. He followed his scurrying with a great deal of enthusiasm as though expecting any moment the chipmunk would stop and play with him.

Then, later in the evening, an owl was hooting, quite boldly, in the woods just beyond the hollow. I couldn't see him, only hear him, but his call was loud and persistent. Other birds were calling so enthusiastically it was almost a cacophony ... but a rather nice one.

As I stood and listened, all the insects seemed to come to life. So many insects cover even one acre of ground. Millions. Many millions. Really. There's so much going on out there. When I think of all that's happening in the natural world all around this planet at any given moment ... it's mind-boggling. Also, very life-affirming.

Mary Oliver, as always, says it with love:

It was early,
which has always been my hour
to begin looking
at the world

and of course,
even in the darkness,
to begin
listening into it,

as I walk by,
as he did
on this morning.
So many gifts!

What do they mean?
In the marshes
where the pink light
was just arriving

the mink
with his bristle tail
was stalking
the soft-eared mice,

and in the pines
the cones were heavy,
each one
ordained to open.

Sometimes I need
only to stand
wherever I am
to be blessed.

Little mink, let me watch you.
Little mice, run and run.
Dear pine cone, let me hold you
as you open.

For more on just how much life is out there, here's a good page, with fascinating information. I mean it. Fascinating: www.si.edu/Encyclopedia_SI/nmnh/buginfo/bugnos.htm

Posted by Teresa Evangeline at 11:44 AM