To Drink Water from Cupped Hands 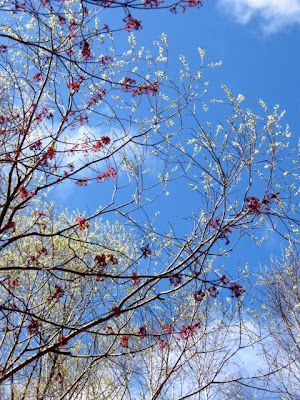 A beautiful male cardinal, who appeared to be flying solo, stopped by my yard this morning and sat in the crab apple tree long enough for me to take a few photos. Last year a lone cardinal passed through and I couldn't help but wonder if it's the same one, returning along a traditional route to his summer home. 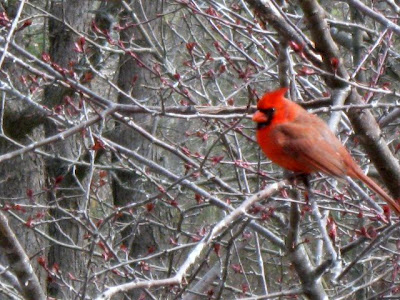 The trees are budding out despite very cold nighttime temps and several gloomy, not-so-warm days. But today the sun is shining and so I stopped to admire the trees at the far end of the rock garden near the hollow. Their tiny tips of red and green waving in the wind against the blue sky remind me that everything is going according to plan. The world knows what it's doing without me having to do a thing except witness its effortless awakening.

Passing a bird house that had gone unnoticed when I first moved here, I stopped to admire the peeling paint of what must have been a rather colorful little dwelling once upon a time. I thought about Otis, the man who cared for this place so lovingly, noted the date he'd painted on the back of the birdhouse, and renewed my own commitment to the land. 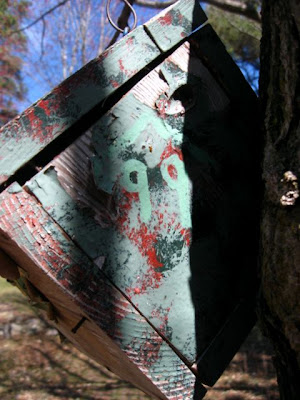 As I walked up the sloping lawn, my father came to mind and I was momentarily filled with a sadness over the fact that he is no longer in this world. This man who loved the world and yet struggled at times to find peace within it, who saw eighty-four springs (it seems like such a paltry number now), is not here to see this spring. And now, I can't seem to shake a Raymond Carver poem I read a few days ago. It speaks to why I returned to this place of my childhood. I thought you might like it, too.

I've wasted my time this morning, and I'm deeply ashamed.
I went to bed last night thinking about my dad.
About that little river we used to fish -- Butte Creek --
near Lake Almanor. Water lulled me to sleep.
In my dream, it was all I could do not to get up
and move around. But when I woke early this morning
I went to the telephone instead. Even though
the river was flowing down there in the valley,
in the meadows, moving through ditch clover.
Fir trees stood on both sides of the meadows. And I was there.
A kid sitting on a timber trestle, looking down.
Watching my dad drink from his cupped hands.
Then he said, "This water's so good.
I wish I could give my mother some of this water."
My father still loved her, though she was dead
and he'd been away from her for a long time.
He had to wait some more years
until he could go where she was. But he loved
this country where he found himself. The West.
For thirty years it had him around the heart,
and then it let him go. He went to sleep one night
in a town in northern California
and didn't wake up. What could be simpler?

I wish my own life, and death, could be so simple.
So that when I woke on a fine morning like this,
after being somewhere I wanted to be all night,
somewhere important, I could move most naturally
and without thinking about it, to my desk.

Say I did that, in the simple way I've described.
From bed to desk back to childhood.
From there it's not so far to the trestle.
And from the trestle I could look down
and see my dad when I needed to see him.
My dad drinking that cold water. My sweet father.
The river, its meadows, and firs, and the trestle.
That. Where I once stood.

I wish I could do that
without having to plead with myself for it.
And feel sick of myself
for getting involved in lesser things.
I know it's time I changed my life.
This life -- the one with its complications
and phone calls -- is unbecoming,
and a waste of time.
I want to plunge my hands in clear water. The way
he did. Again and then again. 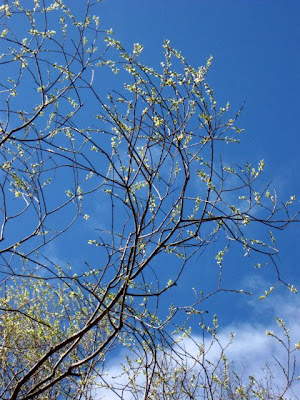 Posted by Teresa Evangeline at 5:00 PM